Directors of New Zealand entity have connections to scandal-hit firms 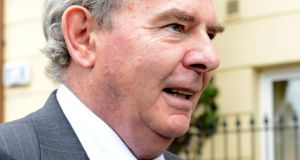 The Latvian businessmen behind a firm the High Court heard last week was making substantial payments towards the family of Seán Quinn’s legal costs are part of an international network of proxy directors of companies linked to financial scandals.

Lawyers for the former Anglo Irish Bank told the commercial court it understood a New Zealand company called Corlex had made substantial payments in relation to Quinn costs.

In an affidavit Karyn Harty, a solicitor acting for IBRC, said this company had Latvian directors as part of her evidence outlining an alleged conspiracy by members of the Quinn family to move overseas property assets worth hundreds of millions beyond the bank’s reach. The Quinns are denying the allegations.


Cypriot nationality
The shareholder of Corlex is another New Zealand company called Maxhold which has a director of Cypriot nationality. Companies listing Mr Spatz and Mr Bilder as directors were identified by the Organized Crime and Corruption Reporting Project, a consortium of investigative journalists from Novaya Gazeta in Russia and the Kyiv Post , in a major 2012 report into the use of proxy directors in Russia and eastern Europe.

The report said Latvian proxy directors were usually unaware of the actions by their companies in various international scandals but their names were “the calling cards of a deeper network”. Mr Spatz is a director of two British Virgin Islands firms called Milltown Corporate Services and Ireland & Overseas Acquisitions Ltd according to the International Consortium of Investigative Journalism’s Offshore Leaks Project.

Milltown Corporate Services and Ireland & Overseas Acquisitions Ltd were used to set up companies which in 2008 and 2009 according to a June 2011 United States court ruling were involved in overcharging a Ukrainian state- owned company $60 million for vaccines and medical supplies. There is no suggestion Mr Spatz knew or benefited from this alleged fraud.


Factory worker
Another director of Milltown Corporate Services and Ireland & Overseas Acquisitions is Erik Vanagels, a 73-year-old Latvian former factory worker described by the Sunday Times in June 2013 as a “corporate cipher used as a veil to conceal the real beneficiaries of companies”.

Mr Vanagels’s previous directorships include a UK firm called Marine Energy Trading Company which chartered the Faina , a Ukrainian ship. After it was hijacked by Somali pirates in 2008 it was found to be carrying 33 Soviet-era tanks bound for Sudan, then under an arms embargo.

Mr Bilder, a director of Corlex, has also been a director numerous times of companies where Mr Vanagel is or was a director. Mr Bilder was previously a director of Falcona Systems Ltd in New Zealand, a struck off company. Ukrainian newspaper Dzerkalo Tyzhnia reported in 2012 that this firm was embroiled in a scandal involving an alleged $150 million overpayment for an oil rig. There is no suggestion Mr Bilder knew or benefited.

Last week IBRC told the Commercial Court that information relating to the Quinn family and their overseas property assets primarily in the Ukraine and Russia “continues to emerge”.