Lane says governments must be wary of ECB policies 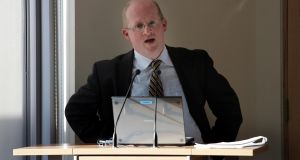 The Central Bank introduced mortgage lending limits two years ago to prevent another credit bubble developing in the future as house prices rebounded from the last crash amid ultra-low ECB interest rates.

“If macro-financial conditions in an individual member country substantially deviate from the rest of the euro area, the area-wide monetary policy may not be optimal from the perspective of the country in question,” Mr Lane said at the ACI Financial Markets Association World Congress in Dublin.

“In this sense, the macro-financial conditions in the rest of the euro area spill over to this country through their impact on monetary policy.”

Mr Lane said that “it is now widely accepted that macro-prudential policies can play an important role, especially in relation to differences in financial cycles across member countries”.

The ECB expects its key interest rate, currently at zero, to “remain ad present or lower levels for an extended period of time” long after when its bond-buying quantitative easing programme, which is designed to boost inflation, is over. The ECB currently plans to buy €60 billion of euro area government and corporate bonds a month until the end of December “or beyond, if necessary”, he said.

Earlier, Taoiseach Enda Kenny said Ireland will be “competitive” as it vies with other European countries to lure financial services from London in the wake of Brexit.

Speaking to a room of about 300 international financial markets executives at the ACI Financial Markets Association World Congress in Dublin, Mr Kenny said that banks and other financial firms in London will not wait for the outcome of political talks on Brexit to make decisions on their future in Europe.

“When this is all over, Ireland will be the only common law, English speaking in the European Union,” Mr Kenny said. “So we will be competitive.”

He outlined that the Government plans to grow the number of people directly employed in international financial services in Ireland by almost 30 per cent over five years.

The industry currently employs about 35,000 people across banking, funds, aircraft leasing and other niche areas of international finance.

The comments come in a week when the Swiss-based Financial Stability Board reported that Ireland is the fourth-largest hub globally for non-bank financing, or “shadow banking”.

Some $2.2 trillion of such assets are currently based in Ireland, according to the FSB. While two thirds of the sector is made up of highly regulated areas, such as investment funds and money market funds, another third, including special purpose vehicles, are not regulated.