Republic vying with Luxembourg, Frankfurt and Paris as new home for London-based body 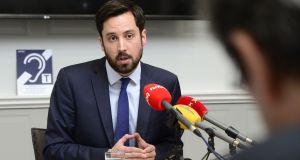 Eoghan Murphy, Minister of State at the Department of Finance: relocation to Dublin is “least disruptive” option for the EBA. Photograph: Cyril Byrne

Ireland is the “least disruptive” place in which to relocate the London-based European Banking Authority (EBA) amid Brexit, according to the Minister responsible for financial services.

Minister of State for Financial Services Eoghan Murphy will use a speech at the ACI Financial Markets Association world congress in Dublin on Friday to underline Ireland’s bid, first announced last October, to secure the EBA for Dublin.

“The EBA, in some shape or form, must leave the United Kingdom,” Mr Murphy will say at the conference. “We strongly believe that the relocation to Dublin is the best option and the least disruptive location for its important work and for its staff.”

The Republic, home to Europe’s worst banking crisis, is vying with Luxembourg, Frankfurt and Paris to become the location of the institution set up to deal with the turmoil and help prevent another crisis occurring.

A procedure for deciding the location for the EBA will be agreed in June. The new base could be announced in the autumn, according to Mr Murphy.