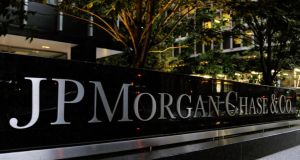 JPMorgan Chase reported a 7.3 per cent drop in quarterly profit as legal costs from a series of government settlements continued to dampen profits at the bank. Photo: Bloomberg

Results excluding the Madoff settlement and other one-time items were $1.40 a share.

Chief executive officer Jamie Dimon is whittling down the firm’s list of legal woes that include allegations it misled buyers of mortgage bonds, rigged markets and turned a blind eye to suspicious activity by customers.

The Madoff agreement, which the bank said last week reduced fourth-quarter profit by about $850 million, capped a year in which JPMorgan spent more than $23 billion on legal settlements.

“They had something close to a kitchen-sink quarter getting some legal issues done.”

Earnings at the corporate and investment bank tumbled 57 per cent to $858 million, driven by a $1.5 billion charge from changing the valuation of some over-the-counter derivatives to incorporate funding costs.

Net income from consumer and community banking climbed 19 per cent to $2.37 billion as provisions for credit losses fell and expenses declined. Revenue was $11.3 billion, down 8 percent from a year earlier.

Mortgage fees and related income dropped 46 per cent to $1.09 billion in the quarter, from $2.04 billion a year earlier.