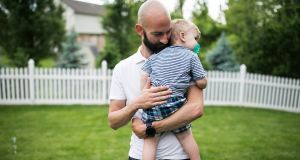 Lead plaintiff in the case against JP Morgan Derek Rotondo pictured with with his son Lincoln at home outside Columbus, Ohio, this week. Photograph: The New York Times

The settlement, the highest recorded in a parental leave discrimination case according to the plaintiff’s lawyers, followed a 2017 legal case brought by a JP Morgan employee who claimed he was told he could not be his child’s “primary caregiver” because he is a man.

The American Civil Liberties Union took the case on behalf of JP Morgan employee Derek Rotondo and other fathers who said their gender was also used as a reason to deny them the 16-week paid leave JP Morgan offers primary caregivers.

The ACLU objected on the grounds of illegal sexual discrimination and filed charges with the Equal Employment Opportunity Commission, resulting in the landmark settlement, which will be used to compensate fathers who were denied leave, as well as covering legal and administration costs.

The case was an embarrassment for JP Morgan, which holds itself up as a progressive, family-friendly employer with policies more generous than most rivals, and last year increased non-primary caregiver leave to six weeks at full pay. The bank argued that its policies were meant to be gender neutral but were incorrectly applied.

It also changed its decision in Mr Rotondo’s case and gave him the full 16 weeks of leave.

“We are pleased to have reached an agreement in this matter and look forward to more effectively communicating the policy so that all men and women employees are aware of their benefits,” said Reid Broda, JP Morgan’s associate general counsel. “We thank Mr Rotondo for bringing the matter to our attention.” The bank did not admit liability in the settlement.

JP Morgan has already given staff additional training to make sure that primary caregiver leave is granted to any parent whose partner is incapacitated, in full-time work or otherwise not in a position to be the child’s primary caregiver, according to a person familiar with the situation.

Peter Romer-Friedman, an Outten & Golden civil-rights lawyer who worked on the case on behalf of the plaintiffs, said the victory “will benefit thousands of families” who have faced similar obstacles.

“Even as some companies like Chase expand the amount of paid leave to their employees, it is important for all to remember that these policies must follow our historic civil-rights laws,” he added.

Citigroup offers 16 weeks paid leave to birth mothers in the US, and eight weeks paid “parental bonding leave” to all other parents, including parents of adopted children. Wells Fargo said its policies were “gender neutral” and include 16 weeks for the primary caregiver and four weeks for non-primaries.

Bank of America offers up to 26 weeks parental leave, 16 weeks of which is paid, to all US employees who become parents, including those who adopt.

Galen Sherwin, senior staff lawyer with the ACLU’s Women’s Rights Project, acknowledged that while JP Morgan’s parental leave policies were “quite generous”, it was crucial that leave was offered “on an equal basis to men and women”.

“The gender stereotype that raising children is a woman’s job is still prevalent, and is reflected in far too many corporate policies,” she added. – Copyright The Financial Times Limited 2019