Deciphering the cause of Quinn Insurance’s demise

Nine years after insurer’s collapse, two of its former directors are focus of public inquiry 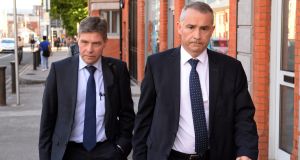 If you’re looking to find out how Quinn Insurance Limited (QIL) collapsed almost a decade ago, who was responsible, and the main reason a 2 per cent levy is added to your motor policy every year, you’re unlikely to find the answers at a public inquiry into the insurer that started this week.

Nine years after the insurer, once the jewel in the crown of businessman Sean Quinn’s cement-to-property conglomerate, Quinn Group, fell into administration, the inquiry in a nondescript building in Stoneybatter in Dublin is focused on two former QIL directors.

Liam McCaffrey, former chief executive of Quinn Group and one-time director of QIL, and Kevin Lunney are being investigated specifically for their alleged involvement in eight subsidiaries of the company providing guarantees against loans to the wider Quinn Group – without the knowledge of the insurer’s board of investment committee.

The Quinn Group loans, arranged by UK banking giant Barclays between 2005 and 2007, amounted to €1.2 billion.

The problem for QIL was that assets of the QIL subsidiaries – including Quinn Property Holdings Limited and Quinn Hotels Limited – counted as part of the insurer’s technical reserves, which were there to cover insurance claims if the business ran into financial trouble.

The guarantees against wider Quinn Group loans meant that these assets may not have been available to QIL’s policyholders if such a situation arose, Eoin McCullough, senior counsel, of the legal team assisting the inquiry, said this week.

Key to the inquiry is the existence of minutes of QIL board meetings giving rise to the guarantees – albeit without a proper quorum – that were signed off by the two men. “Though the evidence is that those meetings didn’t take place,” he said.

Opening statements from the two men show they’re not prepared to take these allegations lying down.

McCaffrey hinted briefly at the entangled finances of the Quinn family and the companies they owned, including how “catastrophic losses” the Quinns made on financial bets – by way of leveraged financial instruments called contracts for difference (CFDs) – in Anglo Irish Bank before the crash had led to their conglomerate suffering significant losses after 2006.

While QIL would fall into administration in March 2010, on foot of a High Court application from the Central Bank, the wider Quinn Group would be seized by Anglo Irish Bank a little over a year later.

McCaffrey said that since the Central Bank decided in 2015 to launch sanctions procedures against himself and Lunney “a number of different suspected proscribed contraventions”, or regulatory breaches, “were put to us”.

Only one remains: their alleged involvement in loan guarantees by QIL subsidiaries, without knowledge of the insurer’s board.

A settlement agreement reached by QIL and the Central Bank in 2013 showed that the insurer had admitted to failing to hold enough money in reserve – or what is known as an adequate solvency margin – and that it actually had a shortfall of €830 million in its assets at the end of 2009.

The guarantees, as the Central Bank argued in court when it sought the appointment of administrators in 2010, were a major factor behind the gap and fuelled its demise. But no one has been brought before the inquiry to answer this matter.

McCaffrey told the inquiry that when the Quinn Group went about the biggest funding exercise in its history in 2005, which would lead to the guarantees, its legal advisers in A&L Goodbody were given instructions that QIL would be ringfenced.

The refinancing included loans from a group of international banks and bonds sold to investors in the US – and marked the first time that the Quinn Group, which had traditionally raised finance on a project-by-project basis, raised debt centrally.

McCaffrey said the wording of documents prepared in advance of the funds being raised only said that the assets of Quinn Insurance, a regulated entity, could not be used for guarantees. “It should have had ‘Quinn Insurance and its subsidiaries’,” he said, adding that it was an omission that did not come to light until 2010.

“I have asked myself whether I should have spotted this issue. Whereas I wish I had . . . it didn’t occur to me,” McCaffrey said. “The facts are that we took and followed appropriate legal and financial advice.”

He noted that reference to the guarantees were included in notes to the annual accounts of the QIL subsidiaries. “We were transparent. Nothing was hidden. The notes were in plain sight,” he said.

Meanwhile, Lunney, who stepped down from a management role at QIL in October 2005 to become a non-executive director as he took on another role within the Quinn Group, said while he was aware of the group refinancing at the time, he had “practically no involvement in it”.

Mr Lunney said that he was “as shocked and surprised as everybody” to learn in 2010 that QIL subsidiaries had guaranteed the group loans. While he accepted that his signature was at the bottom of enabling documents, he said he believes that these were signed as part of a volume of paperwork that passed through his desk.

“What I can say is that if it had been considered for a moment by me that the documents I was being asked to sign could have put additional risk on QIL or its subsidiaries, that would have been a red flag,” he said.

Adrian Burke, partner with A&L Goodbody who led the legal team that advised on the Quinn Group refinancing, rejected all claims that his firm had failed to discharge its duties as QIL was left exposed by its subsidiaries’ guarantees. A&L Goodbody was not acting for QIL, he said.

“Are you telling the inquiry that in 2005, neither you nor anyone in A&L Goodbody knew that the assets in QIL subsidiaries were being used as part of technical reserves for QIL?” McCullagh asked Burke.

“No, we didn’t,” he replied, saying that the Quinn Group itself decided what business units were to be used to provide guarantees.

PwC Ireland audit partner Kevin Egan, who presided over the audit of QIL and four of the relevant subsidiaries during the period, told the inquiry on Wednesday that his firm was aware of the guarantees from notes in the accounts of the four units, which referred to them as contingent liabilities.

However, the inquiry heard that PwC did not join the dots – and was not aware of the existence, or effect, of the guarantees on QIL when carrying out separate audits of the insurance company. Egan acknowledged that he signed off on audited accounts for QIL and the four subsidiaries during the relevant period.

“I’m making the distinction between two different audits. It would require me to take information from one set of audits into another,” Mr Egan said, adding that the annual audits of QIL and the subsidiaries were typically many months apart.

Egan said that it was the responsibility of QIL management in preparing annual accounts to provide information on the guarantees by way of minutes of meetings giving rise to the commitments. No such minutes were provided to PwC, he said.

The PwC partner insisted that his team had a track record of bringing a “whole series” of governance issues to the attention of QIL management when they were auditors.

“Clearly, if we had made the connection in those audits, we would have referred back to the directors of QIL,” he said.

Meanwhile, Mr Egan said he filed reports with the Central Bank on governance issues at QIL in 2008, under a section of the Insurance Act 1989. The first one was submitted in February of that year when PwC became aware that the company had provided loans to Barlo, a plastics business that belonged to the Quinn Group, and QIL subsidiary Quinn Property Holdings.

The second report was handed over in May 2008 as PwC completed the audit of QIL’s 2007 accounts. “[This] identified it was control failings, or the overriding of established controls, which allowed those unauthorised transactions to take place,” he said.

QIL was bought out of administration in 2011 by Boston-based insurer Liberty Mutual Group and renamed Liberty Insurance. But anyone taking out general insurance in Ireland has been left carrying the cost of QIL’s demise.

The administrators have had to call on the Insurance Compensation Fund to the tune of €1.133 billion to meet claims and other items surrounded with QIL’s implosion. A 2 per cent levy was introduced in 2012 on non-life policies to recoup that cost over time (though the collapse, more recently, of Setanta Insurance and Enterprise Insurance have added to the reliance on the fund). The charge is expected to remain in place for decades.

The inquiry panel – comprised of chairman Mr Justice Iarflaith O’Neill, a retired High Court judge, Ita Mangan, a barrister, and John Cashin, a former in-house lawyer for Zurich Insurance Group – is expected to complete public hearings by the end of next week.