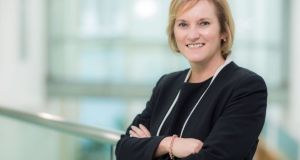 Ms Deering, who was recently among the contenders to replace Wim Verbraeken as chief executive of KBC’s Irish unit, is the first head of the newly established State-backed lender for builders.

She is due to take up the role in September, with Michael Broderick, the organisation’s chief commercial officer serving as interim chief executive till then.

“Ms Deering will bring a wealth of banking and business experience to HBFI as it aims to establish itself as a commercial provider of residential finance. I am confident that Dara will provide strong direction and drive to HBFI over the coming years as it achieves in its objective to provide much needed finance for residential developments through-out the country,” he said.

HBFI, which officially opened for business in late January, has €750 million from the Ireland Strategic Investment Fund (ISIF) to fund the delivery of up to 7,500 new homes over the next five years. It also has permission to seek additional funds on the market if needed.

Builders who have been unable to secure loans from banks or other lenders will have access to five-year loans of up to €35 million, for developments ranging in size from 10 to about 200 homes under the scheme.

To qualify for loans, a developer must have secured or submitted planning permission for a project, the scheme must also be deemed commercially viable by HBFI, and the borrower has to provide a minimum of 20 per cent equity, which can include the value of the site.

Ms Deering has been with KBC Bank Ireland since early 2012 and was seen as a potential successor to Mr Verbraeken, who is returning to the Belgian bank’s head office in Brussels. However, she lost out to Petter Roebben, a former senior general manager of group credit with the bank.

Prior to joining KBC, Ms Deering was director of retail business at EBS and chief executive of its mortgage finance business.

1 Missing Wirecard executive could be Austrian spy, prosecutors say
2 How long can Government afford to keep State pension age at 66?
3 Trump vs Biden: Stakes are high for the Irish economy
4 Revenue publishes list of companies tapping State for wage support
5 Help, I’ve no PRSI stamps – can I still get a pension?
6 Grade A office space on Baggot Street seeking €48 to €55 per sq ft
7 Angela Merkel sweeps in to save the euro zone
8 ‘Going abroad forced me to challenge assumptions that I had’
9 Singer Niall Horan shares in €1.7m payday from Irish business
10 High time: Netherlands moves to clean up absurd cannabis policy
Real news has value SUBSCRIBE