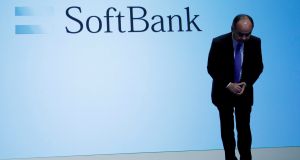 SoftBank chief executive Masayoshi Son said the share buyback reflected “the firm and unwavering confidence we have in our business”. Photograph: Kim Kyung-Hoon/Reuters

SoftBank is launching an emergency 4.5 trillion yen (€38 billion) asset sale to fund a share buyback and debt reduction, in a determined effort by Masayoshi Son to stem a collapse in the company’s share price sparked by the coronavirus crisis.

Shares in the Japanese technology group soared almost 19 per cent yesterday after it unveiled the programme, which includes a plan to repurchase two trillion yen of its own shares on top of the 500 billion yen buyback it promised 10 days ago. Combined, SoftBank would be repurchasing 45 per cent of its stock.

“This programme will be the largest share buyback and will result in the largest increase in cash balance in the history of SBG [SoftBank Group], reflecting the firm and unwavering confidence we have in our business,” Mr Son, the group’s founder and chief executive, said in a statement.

SoftBank did not disclose which assets it would sell over the next 12 months from its sprawling portfolio, but analysts are focusing on its $140 billion stake in Chinese ecommerce group Alibaba.

The asset sale comes amid a tumultuous period for the Japanese conglomerate. On Monday the Financial Times reported that Leon Black’s Apollo Global Management hedge funds had placed a large short bet against bonds issued by SoftBank, a trade that Apollo had discussed with investors at a presentation in December, according to two people in attendance, citing concerns over SoftBank’s debt load. – Copyright The Financial Times Limited 2020