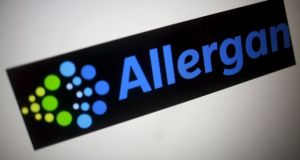 Last year US pharmaceuticals group AbbVie was hit with an unexpected €572m stamp duty bill in relation to its planned takeover of Allergan.

Ireland’s reputation for tax certainty is under threat because of the “aggressive” actions being taken by Revenue, the Dublin-based Edmund Burke Institute has claimed. The free market think tank said the attractiveness of the Irish economy for foreign direct investment (FDI) was being undermined by a series of upwardly reassessed tax bills levelled against multinationals here.

Late last year US pharmaceuticals group AbbVie was hit with an unexpected €572 million stamp duty bill in relation to its planned takeover of Dublin-domiciled peer Allergan.

Revenue is also pursuing Japanese pharma group Takeda for nearly €400 million relating to its acquisition of Dublin-based Shire in 2018. The Takeda case is under appeal.

The cases are the latest in a list of revised tax bills levelled at multinationals, which the institute links to an EU-wide crackdown on so-called sweetheart tax deals, the most high-profile of which was the European Commission’s €13 billion ruling against Apple, which is also under appeal.

The institute has written to party leaders asking for an explicit commitment on tax certainty both during government formation talks and should they become part of the government.

In its letter, it claims Revenue’s “newly aggressive approach” has been actively undermining the principle of tax certainty and “directly damaging one of the largest selling points of Ireland as a destination for FDI”.

It noted that several recent large upward reassessments were “part of a deeply worrying trend coming from Revenue”.

The institute said upward reassessments of the tax liabilities of large corporates and high-net-worth individuals here had risen from 337 in 2015 to 915 in 2018, which corresponds to a near 300 per cent increase.

“As this situation is escalating at the same time as the economic challenges that the Irish economy faces increase in severity and scope, particularly now with the addition of the possibility of a global recession due to the outbreaks of Covid-19, we believe that there is a real risk of this situation causing substantial economic harm to Ireland and to the families and communities that are currently reliant on these companies, in particular, and FDI, in general,” the institute said in its letter.

The group also claimed it was fielding multiple queries from US think tanks and individuals who have expressed concern that Revenue’s new behaviour would be harmful to US multinationals based here.