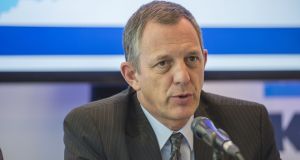 KBC Bank Ireland has declined to give a key Oireachtas committee an estimate of how many of its “tracker rate” mortgage customers were affected by an overcharging scandal that has hung over the industry in recent years.

Speaking to the Oireachtas finance committee, the bank’s chief executive, Wim Verbraeken, also said that the bank will miss a key deadline set by the Central Bank for this weekend, by which lenders were expected to have identified all impacted customers, commenced engagement with most of them, and filed a report with the regulator.

“We’re developing our determination around the identification around customers affected, plus a scheme for the redress and compensation of those customers. That will be submitted to our board of directors and transferred to the Central Bank. I cannot give you a specific timeline with regard to that effort.”

Belgian-owned KBC, which has about a 10 per cent share of the Irish mortgage market, is alone among the country’s top five mortgage lenders not to have outlined in detail the extent to which their ECB tracker-rate customers had been impacted by overcharging.