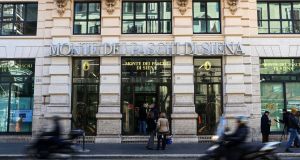 Italy will plough as much as €20 billion into the country’s banks after Banca Monte dei Paschi di Siena failed to secure its future by raising funds from investors. More lenders may seek lifelines soon.

Monte Paschi, the world’s oldest lender, said in a statement it will ask the government for a “precautionary” capital increase. “We will see if other banks ask for aid,” Italian finance minister Pier Carlo Padoan told reporters after a cabinet meeting in Rome.

Italy’s banks are struggling under the weight of a €360 billion mountain of bad loans, a plight that has eroded profitability and undermined investor confidence.

A nationalisation of Monte Paschi, the biggest in Italy since the 1930s, could be followed by rescues for lenders including Veneto Banca and Banca Popolare di Vicenza as part of the government package.

Running out of liquidity

The €20 billion pledged by the government will provide both emergency liquidity guarantees and capital injections. Banks will be able to request precautionary recapitalisations that would see some bondholders taking a hit, the government said.

Monte Paschi had said on December 21st that it may run out of liquidity after four months, sooner than the 11 months forecast just a week earlier. Late on Thursday, it abandoned plans to raise €5 billion from the market. The bank said it was scrapping the entire capital programme, including a sale of bad loans and a debt-for-equity swap.

“A nationalisation should have been done five years ago,” said Francesco Confuorti, chief executive officer of Advantage Financial, a Milan-based investment firm. “The bank lost time, money and credibility seeking to keep the patient on life support when he was in an irreversible coma.”

Monte Paschi chief executive Marco Morelli had crisscrossed the globe looking for investors to back the bank’s reorganisation plan, which included a share sale, the debt-for-equity swap and the sale of €28 billion of soured loans.

Qatar’s sovereign-wealth fund, which had considered an investment, held off on committing to buy shares, people with knowledge of the matter have said. Other institutions that were considering acquiring stock had indicated that they would put funds in the troubled bank only if it were able to raise €1 billion from cornerstone investors, according to the people.

The stock has plunged 87 per cent this year, closing at €15.08 in Milan on Thursday, the lowest since it began trading in 1999. That left the company with a market value of about €442 million.

Monte Paschi was deemed Europe’s weakest major bank in July stress tests and was told by the European Central Bank to clean up its balance sheet. The firm was supposed to raise €5 billion of fresh funds by the end of the year to cover losses while disposing of bad loans.

Undermined by derivatives deals that hid losses, Monte Paschi has received €4 billion in taxpayer-funded bailouts, most of which it has repaid, and €8 billion from investors since 2009.

1 Over 400 complaints from migrant workers at meat plants lodged with WRC
2 Avoca warns of redundancies due to coronavirus
3 The Irish Times Deal of the Year: The three finalists
4 Coronavirus spreads to sandwich king
5 Errant texts highlight weaknesses in banks’ digital shift
6 McGann stepping down at troubled Aryzta
7 Moving in and out of lockdown is a recipe for economic disaster
8 National Broadband Plan customers to get download speed boost
9 The Irish Times Company of the Year: the three finalists
10 Non-executive directors face new paradigm in the boardroom
Real news has value SUBSCRIBE