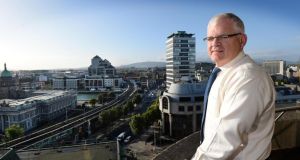 Irish Life generated net earnings of $52 million Canadian dollars (€34m) in the first quarter of this year, according to results published yesterday by its parent company, Winnipeg-based Great-West Lifeco.

This compared with $44 million in the fourth quarter of last year, and was before taking account of $5 million in restructuring costs relating to the integration of Irish Life and Canada Life.

The results also showed that Irish Life contributed $2.6 billion to Great-West Lifeco’s sales in Europe, and $120 million to the parent company’s fee income from the region in the three months to the end of March.

He revealed Great-West Lifeco is spending €12 million to refurbish Irish Life’s headquarters on Lower Abbey Street, Dublin. This will house 2,700 staff on completion.

The Canadian group also plans to locate its other Irish asset management businesses, its IT operations for Europe, and its German and reinsurance businesses at the Abbey Street offices.

The integration of Irish Life with Canada Life is expected to result in an annual cut in operating costs of €40 million.

Customer service
“Our focus is on maintaining customer service while we complete the integration of Irish Life and Canada Life in the Irish market,” said Mr Kyle.

“This process continues on track with all milestones to date met within budget and synergy targets.”

Consolidated assets under administration at March 31st grew to $806 billion.

The Canadian financial group said Lifeco premiums and deposits during the quarter were $23.9 billion, up 41 per cent from a year ago.