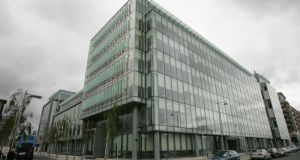 A series of European law firms are aggressively pitching low corporate taxes in their countries to prospective US clients, seeking to tap into the tax inversion frenzy that has seized Corporate America in recent months.

At least eight European law firms are pitching their services to major US law firms and Wall Street banks, hoping that US companies considering an inversion choose Ireland, Britain or the Netherlands for their new tax domicile, according to people with knowledge of the matter.

In an inversion deal, a company moves its tax domicile to a country with a lower effective corporate tax rate through a takeover of an often smaller company in that jurisdiction.

The move has recently been particularly appealing to American companies given the US federal corporate tax rate of 35 per cent is well above those prevailing in countries such as Britain, where the rate is set to drop to 20 per cent next year. Ireland and Britain have also become popular destinations because they allow companies to shift profits into a tax haven and then back to shareholders as dividends without paying any tax - a move that is not possible under the US tax code.

The European law firms are talking up the relative merits of the corporate laws and tax codes in their home countries over rival jurisdictions, the sources said.

The law firms include at least three from Ireland: Arthur Cox, A&L Goodbody, and Matheson; three from the Netherlands - De Brauw Blackstone Westbroek, Stibbe, and NautaDutilh; plus the UK-based Slaughter and May, and Macfarlanes, according to the sources.

Their pitches on inversions appear to have increased in recent months, the sources said, with more blue chip US companies such as Pfizer and Walgreen actively exploring deals for tax benefits.

Most of the big New York firms also do not have offices in Ireland. American firms prefer to partner with local firms on inversion deals not only for their specific legal and tax expertise in a particular country, but also because they’re not directly competing with them, the people with knowledge of the matter said.

A number of the European firms stressed that they have offices in the US and regularly visit US law firms to discuss various transactions, not just inversions.

Conor Hurley, partner and head of tax at Arthur Cox said: “M&A is one of a number of important areas for us and inversion work is part of that but we are a full service law firm.”

A spokesperson for Stibbe said that the Dutch firm has had a New York office for almost 30 years to serve its clients and is not focusing on inversion services in particular.

“Interest in US-UK M&A has been running high for a number of months ... The UK is increasingly regarded as an attractive environment for business and not only for tax reasons,” said Andy Ryde, head of Slaughter and May’s corporate practice based in London.

Chris Warner, head of NautaDutilh’s tax practice in Amsterdam, said:”There is perhaps a little more activity in this area now and more reasons to talk to each other about what’s going on in the marketplace.”

Matheson and A&L Goodbody declined to comment, while the other firms did not respond to requests for comment.

By moving their tax domiciles to lower rate jurisdictions, American companies may be able to avoid the top US corporate rate on more of their global profits. Currently many companies are holding foreign profits tax-free overseas as bringing them home means they could face a big US tax liability.

“Inversions are the topic du jour at the moment,” said Patrick Cox, a tax partner at Withers in New York. “So you will have law firms in jurisdictions with low tax rates coming out to say, ‘You should come here, we have a sophisticated legal system, banking regime and low tax rate.’”

Arthur Cox, which worked on the $1.1 billion merger of US banana company Chiquita Brands International and Irish rival Fyffes, has advised on $78 billion worth of transactions so far this year, compared with $23 billion in the same period last year.

“Potentially what’s happening here is that there’s a new toy out there and everyone wants a piece of it,” said Adam Rosenzweig, a law professor at Washington University School of Law in St Louis.