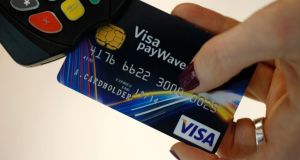 Irish consumers spent a record €28.4 billion on their Visa cards in 2014, an increase of 32 per cent on 2013. (Photographer: Simon Dawson/Bloomberg)

According to Visa, the record expenditure reflects the continued shift by Irish consumers from cash and cheques to electronic payments; the introduction of new payments technologies such as Visa Personal Payments; and the momentum behind contactless payments with over 10 million transactions made to date.

The average transaction value was €56.40, down by 5 per cent, and overall transactions rose by about 39 per cent (on debit, credit and prepaid cards) during 2014 to 503 million transactions.

Conor Langford, country manager Ireland, Visa Europe, said that the payment company’s ambition in 2015 is to continue to drive the momentum behind consumer and retailer adoption of electronic payments.

“We will also continue to work with our member banks to develop new products and services to ensure that Ireland will remain on the cutting edge of the payments industry.”

E-commerce spending rose to almost € 5.6 billion, a 30 per cent increase on the corresponding period, indicating that Irish Visa cardholders spend €3,867,044 online every minute on an average day. Across Europe, ecommerce grew by 17 per cent in the year to more than € 280bn.

Visa says it saw an increase in the use of its Visa Personal Payments (VPP) service during the year.With VPP, consumers can send and receive money in a convenient manner using just the recipient’s mobile number. Irish consumers are now using the service for a variety of tasks such as splitting restaurant bills with friends and sending money to relatives in another part of the country. The average transaction value is €72.28, while the most popular time for sending a payment is between 7-8pm and Friday is the most popular day in terms of usage.

Growth was also reported in contactless payments, with the ten millionth transaction milestone reached in December 2014. The average purchase was € 8.09, and the latest retailers to adopt contactless in Ireland are H&M, Burger King, KC Peaches, O’Briens Sandwich Bars and Munchies.