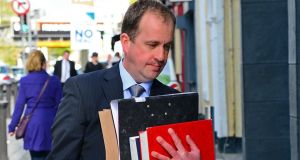 Alan Hynes, from Wexford, arriving at a hearing of the Chartered Accountants Regulatory Board, in Dublin. Photograph: Eric Luke /Irish Times

The Wexford accountant Alan Hynes has told a disciplinary tribunal that information he gave about six-figure fees to the Chartered Accountants Regulatory Board (Carb) in 2010, was incorrect.

Mr Hynes has also said that notes concerning the issue in the audited accounts of Tuskar Asset Management plc (Tam), a property venture he was involved in establishing and which has since collapsed with the loss of tens of millions of euro for investors and banks, were also incorrect. The accounts were audited by Deloitte and Touche.

The former Tam director is being cross examined on day eleven of the tribunal which is hearing evidence about a range of complaints made against him by former investors in Tam and other property ventures. Many of the investors are former clients of his accountancy firm, Hynes and Co.

Responding to Brian Farren, counsel for Carb, Mr Hynes explained the nature of a number of entities associated with the property ventures. He said he and his wife Noreen used the trade name A & N Properties for some their property ventures. They also had a company, Tuskar Property Holdings Ltd (TPH), which they owned and were the directors of, and which was also involved in property development.

Mr Hynes was asked how his clients or the investors in the various property ventures knew what “hat” he was wearing at any particular time. “They were dealing with me. No-one ever asked me who I was,” Mr Hynes said.

Mr Farren asked about the role played by TPH in a property venture in Maynooth, Co Kildare, where the investors set up a limited company, S&P Dublin Ltd. Mr Hynes said the people involved engaged TPH which provided services to S&P. He said there was no written contract. “TPH did not enter into contracts in a formal way,” he said. He said loans taken out by S&P were lodged to a TPH bank account as S&P did not have one, and this was authorised by S&P.

Mr Hynes said TPH worked “pro bono” for a while but expected that it would be rewarded in time for projects that were successful.

Later, when Tam was established, a number of previously existing projects were subsumed into the new company. Fees due to TPH were then paid by Tam to Hynes & Co. “Hynes & Co absorbed the TPH fees in respect of the projects Tam took over,” Mr Hynes said. “There was a decision made to do it this way,” he said. Asked who made this decision, he said: “Myself.”

When asked why Hynes and Co had been paid for work done by TPH, Mr Hynes said his firm had a legally binding contract with Tam while TPH did not.

Mr Farren pointed out that in 2010 Mr Hynes had told Carb in response to written questions, that Tam had “decided” to pay TPH in 2007 for project management fees incurred 2.5 years earlier. Mr Hynes agreed that this was wrong, and that the money was paid to Hynes & Co.

Notes to the 2007 Tam accounts stated that Hynes & Co had been paid €284,860 in fees. Mr Hynes said this included the €140,000 in fees he said were owed to TPH for project management services for earlier projects including Maynooth. A separate note stating that TPH “was paid” €140,000 for services should not have been included in the accounts, Mr Hynes said, as that amount was already included in the €284,860 paid to his accountancy firm.

Earlier the tribunal heard that a document requested by the tribunal and outlining details of the fees received by his firm and TPH in relation to the property projects that are featuring at the tribunal, had yet to be finalised by Mr Hynes, despite his being asked to have it prepared by the beginning of this week.

Mr Hynes said that in relation to another development, in Dundrum, Dublin, he had suggested verbally to the investors that TPH would be paid €7,500 plus VAT per apartment built. This would be agreed, or satisfied, at the end of the project, he said. “A hard figure was not agreed.”