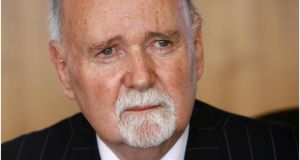 Michael Fingleton: The joint special liquidators of IBRC have said they intend to continue with the bank’s legal action against the former chief executive of Irish Nationwide

The joint special liquidators of the Irish Bank Resolution Corporation have said they intend to continue with the bank’s legal action against the former chief executive of Irish Nationwide, Michael Fingleton.

In a statement, the liquidators, Eamonn Richardson and Kieran Wallace, confirmed that the bank has settled its legal action against former directors of the society in connection with losses sustained by the society. The settlement arose in mediation talks and included an undisclosed payment from the former directors. The former directors involved are Michael Walsh, Terence J Cooney, David Brophy and John S Purcell.

The State-owned bank had claimed the former directors had failed to properly discharge their duties and that these failures caused or contributed to the losses sustained by Irish Nationwide. The IBRC is comprised of the society and Anglo Irish Bank, the two financial institutions that collapsed at the end of the property boom.

In 2013 the Commercial Court was told that there was an unusual management structure at Nationwide where the board delegated all of its powers by resolution to Mr Fingleton, giving him significant autonomy on lending and decision-making. There was an excessive concentration of powers in his hands, the court heard.

The liquidators also said on Wednesday night that the process where Eugene F Collins solicitors is looking into matters concerning the performance of the former auditors to the society, KPMG, was continuing and that the outcome of that review is expected within the next three months. As part of this process, accountancy firm BDO is reviewing the audit of Irish Nationwide by KPMG. The process overseen by Eugene F Collins was put in place as Mr Richardson and Mr Wallace are both partners with KPMG.

The liquidators said they believed the settlement with the directors was a positive result for the bank and best served its interest and those of its creditors.

The liquidators are in the process of winding down the IBRC, with two massive corporate legal actions involving the family of the former billionaire Sean Quinn, among the matters outstanding.

The decision to liquidate IBRC allowed the Government to replace promissory notes with government bonds in an exercise that reduced the deficit by approximately €1 billion per year.