Good week for Nama – but now for the grilling 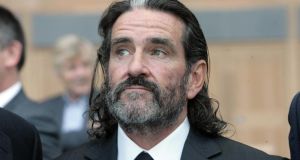 Other Irish developers who have exited Nama in recent times, including Johnny Ronan, have been far from complimentary about its operation. Photograph: Collins photos

It has been a big week for the Nama. On Tuesday, the worst-kept secret in town was confirmed with the €1.85 billion sale of Project Jewel to a combined bid from UK property group Hammerson and Germany insurer Allianz. The face value of the loans was €2.6 billion.

Yesterday, it redeemed another €1.75 billion of senior debt, bringing to €21.1 billion the amount it has paid down to date. This equates to 70 per cent of the €30.2 billion of senior debt originally issued to acquire bank loans. The repayments are ahead of schedule, which is good news for taxpayers as this is effectively a contingent liability on the State. The agency will face a grilling today from the Public Accounts Committee about the controversy surrounding the €1.6 billion sale of Nama’s Northern Ireland loan book, known as Project Eagle.

The sale of Project Jewel, which included Dublin’s Dundrum Town Centre, must have been bittersweet for Joe O’Reilly, whose company Chartered Land managed and developed the assets over a number of years. In spite of the big price tag, and having told the Oireachtas Banking Inquiry in July he had already repaid €400 million of his €2 billion par debt to Nama, it is understood that O’Reilly is still not completely clear of the State agency due to his involvement with other connections.

Other Irish developers who have exited Nama in recent times have been far from complimentary about its operation.

Cork developer Michael O’Flynn used his appearance before the Banking Inquiry to let loose against the agency. This was understandable, given that he spent many months following his exit in litigation with his new lender, Blackstone.

Johnny Ronan, pictured, is another to have exited Nama. He used his written statement to the inquiry to attack Nama with some unfortunate language.

Meanwhile, O’Reilly must await his fate with his new lenders. It will be interesting to see what he has to say about Nama and the way it operated when he finally manages to step through the exit door.