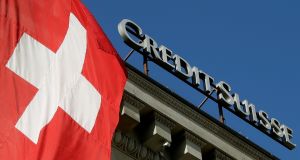 The Swiss financial watchdog demanded remedial steps at Credit Suisse to improve procedures, which would be monitored by a independent third party. Photograph: Reuters

Credit Suisse has been censured by the Swiss financial watchdog for failings in anti-money laundering, in the latest slapdown of a European bank over the handling of suspected illicit finance.

Finma, the financial supervisor, identified weaknesses in a number of corruption scandals, including those involving the world football body Fifa, the Brazilian oil company Petrobras and the Venezuelan oil company PDVSA.

The failings highlighted were the latest in a wave exposed recently at European banks, which have included revelations that as much as $30 billion (€26 billion)of Russian and former Soviet money flowed through the Estonian branch of Danish lender Danske Bank in a single year.

Last week, the finance director at ING resigned after the Dutch bank was fined €775 million for weak controls on preventing money laundering.

On Monday, Finma demanded remedial steps at Credit Suisse to improve procedures, which would be monitored by a independent third party. Under Swiss law, Finma does not have the power to impose fines.

The criticism from Finma comes as a blow to Tidjane Thiam, who took over as chief executive of Credit Suisse in 2015 and has pushed through a sweeping restructuring to refocus the bank on managing the wealth of the world’s rich.

Credit Suisse acknowledged Finma’s conclusions in what it described as “legacy cases”. It had commissioned its own reviews of the incidents, “and has co-operated with Finma throughout the process, taking proactive remediation measures”.

The scandal at Fifa erupted in May 2015 with the dramatic arrest of top football officials at a Zurich luxury hotel. US and Swiss law authorities subsequently launched probes into allegations of criminal misconduct, bribery and corruption, which called into question Fifa’s future.

Finma said that since 2015 it had been investigating “several banks” in relation to suspected corruption involving Fifa, Petrobras and PDVSA. Its investigation at Credit Suisse examined the period from 2006 to 2016 and found shortcomings, including in identifying clients, determining beneficial owners, categorising riskier business relationships and in documentation.

“The identified shortcomings occurred repeatedly over a number of years, mainly before 2014,” Finma said.

To combat money laundering effectively, the watchdog said, all relevant departments “must be able to see all the client’s relationships with the bank instantly and automatically”. Credit Suisse had made progress in implementing such a “single client view”, Finma said, “however this overview is still to be extended outside the compliance unit”.

Separately, Finma said the bank had failed to adequately record and monitor risks arising from a business relationship with a “politically exposed person” and the responsible client “relationship manager”, who had since been criminally convicted.

Finma’s statement did not identify the individuals involved in the case but one person familiar with the matter said it referred to Patrice Lescaudron, a former Credit Suisse client adviser, who was convicted in a Geneva court in February for abusing the trust of clients, including Bidzina Ivanishvili, a former prime minister of Georgia.

Finma said the relationship manager, who had been “very successful in terms of assets under management”, breached the bank’s compliance regulations repeatedly over a number of years. “However, instead of disciplining the client manager promptly and proportionately, the bank rewarded him with high payments and positive employee assessments. The supervision of the relationship manager was inadequate due to this special status,” the regulator said. – Copyright The Financial Times Limited 2018