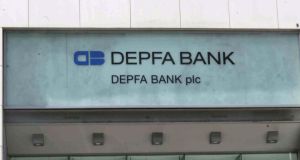 Depfa had an average of 133 employees in Dublin last year out of a total of 146. Photograph: Cyril Byrne

A German state-owned bad bank is eyeing the prospect of extracting special dividends from Dublin-based Depfa Bank as the failed lender’s annual report shows that it is now sitting on as much as €812 million of excess equity capital.

While Hypo Real Estate agreed to sell Depfa under a restructuring plan tied to its own bailout during the financial crisis, the German government pulled the sale in 2014 and transferred the business to state-owned bad bank FMS Wertmanagement (FMS-WM).

Depfa’s net profit almost doubled last year to €95 million, helped by a €71 million gain as it engaged in a series of asset and liability transactions with FMS-WM to accelerate its wind down. The bank’s total assets, which stood at €49 billion at the time of the 2014 transfer, had fallen to €19 billion at the end of December.

The Irish Times reported last October that FMS-WM was considering a second attempt to sell Depfa. It is understood that this is still being weighed, though it is likely that FMS-WM would seek to take out the bank’s excess capital before going about a disposal. Any plan to remove capital would need the approval of the Central Bank.

A spokesman for FMW-WM declined to comment on the prospect of special dividends or a sale of the bank.

Depfa, which was a public-sector finance provider, had total assets of almost €250 billion at its peak in 2008, more than €50 billion more than Bank of Ireland, the State’s largest retail lender, at the time. Its assets are now smaller than the €22.8 billion size of Permanent TSB’s balance sheet.

Depfa, led by chief executive Fiona Flannery since late 2014, had an average of 133 employees in Dublin last year out of a total of 146. Its total headcount has fallen by 41 per cent in the past three years.

Depfa recently served notice of its intention to exercise an option to terminate its lease on a building in Dublin’s International Financial Services Centre (IFSC) and is set to move to a smaller space at the nearby Irish Life Centre in Dublin 1.

The German government’s decision in May 2014 to abandon the sale of Depfa was based on a view that it could secure “a higher value” by running down the business than by disposing of it.

Leucadia National, an investment firm run by Wall Street banker Richard Handler, and Massachusetts Mutual Life Insurance had been selected as preferred bidders after offering as much as €350 million, before the deal was pulled.

4 US removes stumbling block to global deal on digital tax

7 Importance of making a good first impression at interviews

9 Fake views: the trouble with some Amazon ‘customers’