Talks to resolve Tesco strike agreed but escalation goes ahead 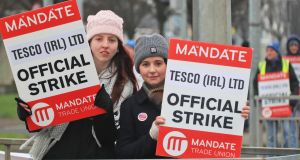 Talks will take place between management at retailer Tesco and the Mandate trade union in an attempt to resolve a strike over terms and conditions for longer-serving employees. But a planned escalation of the dispute will go ahead on Friday, with pickets scheduled to be placed on a further eight Tesco outlets .

The dispute centres on what the union claims are moves by Tesco management without agreement to worsen the terms of employment for staff who were recruited before 1996.

Mandate argues that new contracts proposed for such staff would see some workers experiencing reductions in incomes of up to 15 per cent along, with requirements for increased “flexibility”.

Tesco says it needs to make changes to employment arrangements for the staff concerned. It has said the pre-1996 terms and conditions were agreed more than 21 years ago, before late-night and on-line shopping and Sunday openings came into operation.

It has said the planned moves would affect fewer than 280 employees out of a total workforce of 14,500 and that negotiations on compensation for the change to terms and conditions had been under way for 12 months.

Tesco has repeatedly called on the union to accept a Labour Court recommendation on on changes to terms and conditions of staff who were employed prior to 1996.

The company said on Thursday that it had agreed to new talks following Mandate’s request for discussions.

Tesco said it had always been open to constructive dialogue with the union to reach a “reasonable and fair resolution”. It was for this reason it attended conciliation conferences in the Workplace Relations Commission and a Labour Court hearing and accepted the Labour Court recommendation, it said.

Mandate welcomed the company’s agreement to enter into new talks “without prejudice”.

Mandate general secretary John Douglas said the decision to enter into talks was a “positive development”. But he said a solution could not be found within the confines of the current Labour Court recommendation.