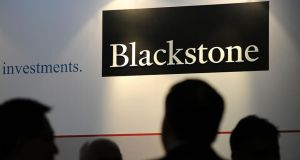 Blackstone is set to lose its top Irish executive, Alan Kerr, who is leaving the firm five years after the US investment banking giant acquired a debt investment business he co-founded in Dublin.

Mr Kerr joined Blackstone’s credit business, GSO, in January 2012 under the sale of Harbourmaster Capital Management, which he had co-founded in 2001. The Irish firm had €8 billion of assets under management at the time of the deal and helped Blackstone boost its European loan holdings to €11.5 billion.

Blackstone is best known for its private-equity and real-estate activities, where Irish investments, including the Blanchardstown Centre, which it acquired last June for €950 million, are mainly managed out of London.

The credit business employs about 40 people in Dublin through a company called Blackstone/GSO Debt Funds Management Europe, which posted €21.9 million of profit in 2015 on total income of €33.5 million, according to its most recent filing with the Companies Registration Office.

Blackstone/GSO Debt Funds Management is one of the largest providers of management and advice in the bundled leverage loans industry in Europe.

In 2012, Blackstone/GSO led a group of senior creditors in Eir, then known as Eircom, who took control of the phone company under a debt refinancing that saw 40 per cent of its more than €4 billion of gross debt written off.

The investment firm’s stake in Eir was about 30 per cent in early 2015, before it sold a 25 per cent interest to hedge fund Anchorage. It no longer has a disclosable equity interest, but remains a substantial holder of Eir’s debt.

Mr Kerr (45), whose official title is head of GSO’s European Customised Credit Strategies business, will transfer his management responsibilities to Fiona O’Connor and Alex Leonard in Dublin between and May, Blackstone said in a statement. After that, he will continue to have an advisory role until he leaves the firm during 2017.

“Mr Kerr is looking forward to tackling new challenges after taking some time out with his family,” Blackstone said. It is understood the chartered accountant, who previously worked with EY, has not yet lined up a new position.