Kerry-headquartered firm processed €35 billion worth of transactions in 2015 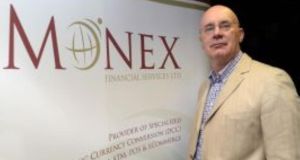 Monex, the Co Kerry-based financial payments company that processes over 190 million card transactions across 46 countries each year, recorded a 16 per cent decline in profits last year.

The company, whose clients include Ryanair, Hertz, Hilton Hotels and Bank of China, generated a profit before tax of €6.4 million last year, compared with €7.6 million in 2014.

Monex attributed the decline in profit to investments made in the business during the year.

Newly-filed accounts show the group, which former Fexco senior executive Frank Murphy established in 2008, processed €35 billion worth of transactions last year, up 26 per cent from the €28 billion worth recorded in 2014.

Mr Murphy still holds 85 per cent of the ordinary share capital, with chief operating officer Michael Crowley owning the remainder of the shares.

The group, which is targeting turnover of €100 million for 2016, after revenue rose about 10 per cent from 2012 to 2015, employs 120 people worldwide, with 55 based in Killarney. The group, whose dynamic currency conversion (DCC) service is available on 68,000 ATMs worldwide, also operates client support services in the United Arab Emirates, the United States and Asia.

DCC technology works by converting credit-card transactions into the currency of the cardholder at the point of sale.

“While the current economic climate is improving in Ireland, growing at a slower rate in Europe and the US an deteriorating in China, such economic concerns have not had a significant impact on Monex Financial Services Limited,” according to a note included with the accounts.

“The company does not depend on any one global region or specific sector. It provides technology-based data-processing services for a wide range of companies . . . This has greatly minimised exposure to any economic difficulties in the euro zone or further afield. The company is continuing to expand its business globally, which in turn will further reduce, on an annual basis, its exposure to economic risk,” it added.