Fears of AIB branch closures in North and UK 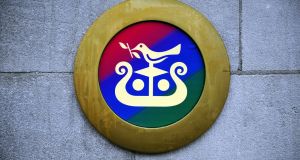 AIB: the Financial Services Union has called on the bank to reassure staff and customers about the future of the branch network in Northern Ireland, especially as the bank had posted a pretax profit of €1 billion for the first six months of this year. Photograph: Aidan Crawley/Bloomberg

AIB has commenced a strategic review of its operations in the UK, including its First Trust branch network in Northern Ireland.

This has led to fears that some of its 30 branches in Northern Ireland could be closed.

In a circular to staff on Monday, the Financial Services Union said Brendan O’Connor, who leads AIB’s UK operation, had committed that when the review is completed, management would engage with the union to agree how best to implement the recommendations that emerge.

Mr O’Connor is said to have pledged that employee impacts would be kept to a minimum and there would be full engagement with the union to ensure that all member concerns were dealt with in advance of any implementation of change. News of AIB’s review of its UK business came just days after Bank of Ireland announced its intention to close eight branches in Northern Ireland later this year in a move that could result in up to 54 voluntary redundancies.

The FSU yesterday called on AIB to reassure staff and customers about the future of the branch network in Northern Ireland, especially as the bank had posted a pretax profit of €1 billion for the first six months of this year.

“In light of the bank’s very significant half-yearly profits, it is imperative that AIB senior management reassures staff and customers about the bank’s future strategy,” Larry Broderick, general secretary of the FSU, said.

“The FSU is seeking reassurances from the bank about its commitment to the existing retail branch network, particularly in Northern Ireland, given the bank’s recent announcement that a wide-ranging structural review of First Trust is to be undertaken.”

In a statement, AIB said: “We continually keep our operations in all markets under review to ensure we are operating as effectively and efficiently as possible.”

In addition to its branch network in the North, it has a niche offering to owner-managed businesses in Britain.

1 Basic income for all: Has the Covid crisis given us a new economic model?
2 Brexit stumbling blocks persist as Barnier travels to London
3 ‘I don’t need to do any of this. . .I don’t actually need to work.’
4 Only way is up for Stripe as valuation skyrockets
5 Online shoppers face unwelcome tax surprise
6 Direct sea routes to Europe offer certainty in choppy Brexit waters
7 Kinzen raises $2.2m as it helps clients fight ‘misinformation’
8 AIB revives €1bn-plus problem mortgages sale
9 ‘Make plans but don’t hold on to them too seriously’
10 Promontoria barred from pursuing doctor over Ulster Bank loan
Real news has value SUBSCRIBE