Talking point with most traders in Dublin was the continued rise of AIB, the bank that is 99.8% State owned 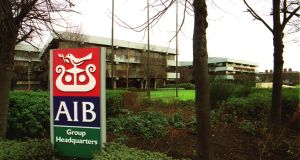 AIB Group Headquarters in Ballsbridge: AIB shares rose by 9.3 per cent to 15.3 cent to give the company a market valuation just shy of €80 billion. The share price has almost trebled in the past three months as retail investors see it as a decent punt on the recovery of the economy. Photograph: Alan Betson

European stocks gained for an eighth day as companies from Royal Philips to Akzo Nobel reported profit that beat estimates and investors speculated the Federal Reserve may maintain stimulus measures into next year.

DUBLIN
The talking point with most traders was the continued rise of AIB, the bank that is 99.8 per cent State owned.

Its shares rose by 9.3 per cent to 15.3 cent to give the company a market valuation just shy of €80 billion. The share price has almost trebled in the past three months as retail investors see it as a decent punt on the recovery of the economy.

With just 0.2 per cent of the stock in free float there is no liquidity in the shares. “I don’t understand what’s behind this,” said one trader. “It’s arguable if AIB is worth one cent a share never mind 15 given its ownership structure and the profile of the business.”

Dragon Oil was another main mover, up 5.8 per cent at €7.30. Traders said there was no significant news flow on the stock. Drinks group C&C closed down 1.77 per cent at €4.17 on low volumes.

Kenmare Resources closed 3.6 per cent lower at 26.5 cent after announcing that a fire had taken place at its Moma mine. Operations were suspended and an investigation into the incident has begun.

G4S gained 3.5 per cent as private-equity investor Charterhouse Capital Partners was said to be considering a £1 billion offer for its cash-solutions business.

Vedanta Resources and Centamin led mining companies higher. Royal Bank of Scotland dropped the most in four months after a report that the UK government will decide next month on spinning off its toxic assets. The FTSE 100 Index added 31.62 points, or 0.5 per cent, to 6,654.2 at the close in London, for its highest level since August 1st.

Actelion rallied to a six-year high as its lung drug Opsumit won US approval. SAP added 4.8 per cent after the maker of business-management software posted increased third-quarter earnings and reiterated its full-year forecast.

The gauge has risen 2.9 per cent this month as US lawmakers agreed to extend the government’s borrowing authority until 2014 and ended the first partial government shutdown in 17 years.

NEW YORK
US stocks swung between gains and losses in early trading, after the S&P’s 500 Index rallied to a record, as investors watched corporate earnings to assess the strength of the economy before tomorrow’s employment data. Homebuilders slumped 2.4 per cent as a group amid a report showing existing-home sales declined for the first time in three months.

General Electric gained 2.6 per cent to the highest level since 2008. – (Additional reporting by Bloomberg)