ECB board shake-up kicks off with vice-president’s job 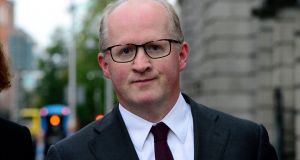 Ireland’s first ECB board member? While Spain looks well placed to secure the next vacancy for its economy minister Luis de Guindos, Central Bank Governor Philip Lane is also thought to be in contention. Photograph: Cyril Byrne / THE IRISH TIMES

Euro area governments will kick off the process on Monday of finding a successor to Vítor Constâncio as vice-president of the European Central Bank with Spain well placed to secure the role for its economy minister Luis de Guindos.

The opening of nominations for the new vice-president will be the first move in a complex chess game of ECB appointments with two-thirds of the central bank’s six member executive board set to depart during the next two years. This includes the bank’s president, Mario Draghi, whose term ends in October 2019.

A complex set of political and other considerations will underlie the appointments process — including the unwritten rule that the currency bloc’s biggest countries should always have a seat, and the need for better gender balance at the highest levels of ECB decision-making.

National governments have been coy about their intentions in the run-up to the start of the nominations process, but two EU diplomats said it was highly likely that the vice-presidency will go to Spain, with Madrid determined to reclaim a seat on the executive board after not having one since 2012.

Mr de Guindos has long been tipped by ECB watchers as Spain’s likely candidate, especially after he ruled out running for eurogroup presidency in 2017 — a move that was interpreted in Brussels and Frankfurt as a signal that he plans to go to Frankfurt.

Privately, however, senior figures within the central bank are lukewarm on the idea of a politician who lacks experience in monetary policymaking taking over the ECB vice-presidency. Mr Constâncio, a one-time secretary-general of Portugal’s Socialist party, had served as governor at the Bank of Portugal before joining the ECB.

“There is an arm wrestle between the eurogroup which says politician, and the Frankfurt people who say central banker. It hasn’t really clarified,” one European diplomat said.

The Spanish economy ministry declined to comment on the appointment process, while the ECB has no official position on the candidates that have been mentioned in conjunction with the vice-presidency.

While Spain is in pole position to secure the post, it is unlikely to be the only country to put forward a candidate, not least because the race for the vice-presidency is a way for governments to stake an early claim in the contest to secure one of the other three executive board jobs coming up for renewal.

Ireland is known to be keen for its central bank governor, Philip Lane, to join the executive board. It is the only founding member of the euro area never to have had a seat.

The Irish government has yet to say whether it will put forward Mr Lane for the vice-presidency. Even if it does not, the governor is viewed as a strong contender to succeed Peter Praet, the ECB’s chief economist, when he steps down in May 2019. The Irish central bank governor is held in high esteem by Mr Draghi and is seen as one of the best economists on the ECB’s governing council.

A person with knowledge of the discussions in Brussels said there was “a fair degree of interest” in Mr Lane as an alternative to Mr de Guindos. “The Germans seem to like him and his reputation is fairly high,” the person added.

Countries will be limited to putting forward a maximum of one candidate each for the vice-presidency. One senior EU official said that the window for nominations would close in mid-February, so as to ensure that a decision can be taken comfortably before Mr Constâncio’s mandate expires. - Copyright The Financial Times Limited 2018