‘Some distance to go’ for scandal-hit Irish banking culture – Donohoe 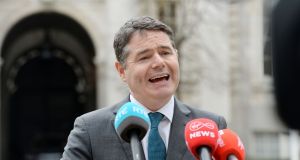 Paschal Donohoe, Minister for Finance: ‘We will strike the correct balance, so as to ensure that Irish financial service consumers do not pay higher interest rates and charges than other European consumers’. Photograph: Alan Betson/The Irish Times

There is “still some considerable distance to go” in the reform of Irish banking culture, Minister for Finance Paschal Donohoe told a conference on Thursday.

The Minister told the event, dedicated to the planned senior executive accountability regime (Sear), that the tracker mortgage scandal that affected more than 40,000 customers of Irish lenders had resulted in a loss of trust and confidence that will “take considerable time and effort to restore”.

Sear, which is part of the Central Bank (Amendment) Bill, will make it easier for regulators to fine, reprimand or disqualify a manager in a financial company.

Mr Donohoe said the accountability regime would be “a key driver” of cultural change across the financial services sector. But culture is “what people do when they think no one is looking”, he noted.

“Given the importance of the financial system, and the potential risks that it poses to the wider economy and society, it is vital that those working in it are doing the right thing for their customers and wider society when they are, now on the rare occasion, not being watched by the Central Bank.”

The Minister said he was “absolutely determined” that the final legislation would be “robust, fit for purpose and legally sound”, adding that he was in no doubt that some would seek to challenge it.

He confirmed that “subject to the constraints of Brexit and other Oireachtas business”, it was his intention to bring the draft heads of Bill to the Government for approval before the end of 2019.

“We will strike the correct balance, so as to ensure that Irish financial service consumers do not pay higher interest rates and charges than other European consumers, due to excessive and inefficient regulatory and consumer protections.”

The conference was organised by advisory company KOBN in association with business group Ibec and the International Fraud Prevention Conference.

Speaking at the same event, the chief executive of the Banking and Payments Federation Ireland (BPFI) Brian Hayes said the organisation recognised that trust in the sector had been damaged in recent years.

However, he said the Government had to be careful not to introduce “a culture of blame” in the new legislation.

“We shouldn’t lose sight of proportionality in the introduction of Sear,” he said. “We do not want to lose good senior people, but should rather reassure them that engaging in positive and appropriate behaviours will result in compliance with Sear.”