Draghi to go to Italian committee but not Irish bank inquiry

ECB says it does not take part in national parliamentary inquiries 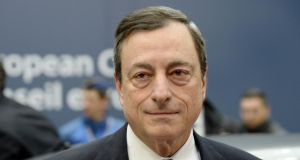 The European Central Bank is holding to its position that its president, Mario Draghi, will not go before the Oireachtas banking inquiry in spite of the fact that he will appear at certain committees of the Italian parliament on March 26th.

In a statement released to The Irish Times on foot of a question as to why Mr Draghi will not attend the Irish inquiry but will address committees of the Italian parliament, a spokesman said: “The ECB as a European institution is primarily held to account by the European Parliament as the representation of all the union’s citizens.

“Therefore, it does not participate in national parliamentary inquiries and will not take part in the proceedings of the inquiry committee of the Irish parliament.”

The spokesman reiterated that deputy president Vítor Constâncio “stands ready” to represent the ECB in “such an exchange of views”, adding he was well placed to do so by being the longest-serving member of the executive board who also attended the relevant Eurogroup/Ecofin meetings during the Irish financial crisis.

Irish MEP Brian Hayes said it was “totally unsatisfactory” Mr Draghi was not willing to appear before the banking inquiry but addresses national parliaments in certain situations.

“But without explanation the president of the ECB appears willing to attend Italy’s parliamentary finance committee.”

The inquiry is also seeking to get evidence from Jean-Claude Trichet, who was president of the ECB during the financial crisis up to 2011. Mr Trichet is due to give a speech to the Institute of International and European Affairs in Dublin next month and it is looking at how its 11 members might be able to pose questions to him in a way that would result in his answer being admissible for the purposes of their report.

Inquiry chairman Ciarán Lynch said: “My objective is to find a way find a way in which committee members can engage with Mr Trichet in a manner that is both of purpose and benefit to the inquiry.”