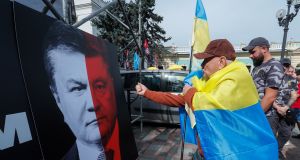 A protester gestures at a placard with combo portrait picturing faces of the President Poroshenko and former president Yanukovich with a slogan ‘No to elections with Yanukovich law’ during their rally near the Parliament building in Kiev, Ukraine. Photograph: EPA

Ukraine has won the latest round of its court battle with Russia over a controversial $3 billion (€2.6 billion) Irish-listed bond, which Moscow bought from Kiev on the eve of anti-corruption protests that drove its pro-Kremlin leaders from power.

The court of appeal in London found on Friday that the case should go to a full trial, which Kiev says is essential to take into account the political significance of the 2013 bond and the losses that Russia has subsequently inflicted on Ukraine.

The ruling overturned a decision by London’s high court last year, which found that the case should not go to a full trial because it would oblige English courts to rule on matters of international law that were outside their remit.

The court of appeal rejected three of Ukraine’s arguments but accepted its request for closer examination of whether the debt was issued “under pressure from the Russian side”, he added.

Since Ukraine defaulted on the debt in 2015, Russia has insisted that the case be treated as a simple breach of financial obligations, regardless of how and why the bond was issued or the current parlous relations between the two states.

In December 2013, Russian president Vladimir Putin agreed to lend $15 billion (€12.8 billion) to Ukraine, a month after its then president Viktor Yanukovich had scrapped plans to sign a historic pact with the European Union in favour of strengthening ties with old ally Moscow.

On December 24th, 2013, Ukraine listed the first $3 billion tranche of bonds on the Irish stock exchange and they were all bought by Russia, giving Mr Yanukovich’s regime a much-needed boost amid growing protests against his rule.

Two months later, Mr Yanukovich and his allies fled to Russia after his security had gunned down protesters on Kiev’s Maidan square. A pro-western government took power in Kiev and relations with Moscow collapsed.

In March 2014, Russia annexed Crimea and began fomenting a conflict in eastern Ukraine, which has now killed more than 10,300 people, displaced 1.6 million and placed swathes of the country’s industrial heartland in the hands of Moscow-controlled separatists.

Kiev argues that the bond deal was effectively a Kremlin bribe to persuade Mr Yanukovich to spurn the EU, and that Moscow’s subsequent aggression against Ukraine has hampered its ability to service its debts; Russia refused to join a 2015 debt restructuring deal between Ukraine and its foreign creditors.