Bankers’ parents ‘embarrassed’ to divulge what their children do 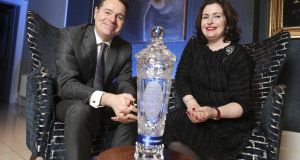 Bank of Ireland chief executive Francesca McDonagh has said she “hates” that the low trust Irish people have in the country’s lenders has left parents of bankers embarrassed to say what their offspring do for a living.

Speaking at the Bank of Ireland National Enterprise Town Awards in Kilkenny on Wednesday evening, Ms McDonagh said: “Whether we like it or not, banks remain among the least trusted organisations in Ireland … I really hate that.”

“I hate it for our customers, whose financial wellbeing depends on us. I hate it for each and every employee who is meeting customers whose trust in us has been dented or lost. And I hate it for the mums and dads of my colleagues who still pause when they’re asked what their children do for a living,” she added.

Ms McDonagh, who joined the bank in October 2017 as public uproar over the industry-wide tracker-mortgage scandal reached a crescendo, has placed culture reform at the heart of a wider transformation programme unveiled in June. It comes at a time when the Government is planning to give the Central Bank additional powers to make top bankers more accountable if they take unnecessary, uncalculated risks or knowingly commit wrongdoing.

Letterkenny, Co Donegal, was crowned the overall winner at the Bank of Ireland Enterprise Town Awards 2018, winning a €33,000 cash prize. The awards recognise and reward towns and urban villages, where businesses and the community have come together, to showcase the spirit of enterprise in their local area.

This year 83 towns and urban villages from almost every county nationwide were represented on the night, and 35 received awards.