Danske Bank to write down €1.2bn in goodwill 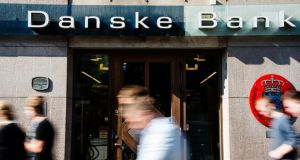 Denmark’s biggest bank will write down 9 billion kroner (€1.2b) in goodwill, marking its latest accounting adjustment after talks with the country’s regulator. (Photograph: Erik Abel/Bloomberg)

On Monday Denmark’s biggest bank said it will write down 9 billion kroner (€1.2 billion) in goodwill, marking its latest accounting adjustment after talks with the country’s regulator.

Danske is also maintaining its long-term target for a return on equity of “more than” 12 per cent, Henrik Ramlau-Hansen, chief financial officer, said by phone. “This has no practical implications,” he said. “It won’t impact our capital, it won’t influence our liquidity or the daily operations or the plans we have for the bank in the coming years.”

Danske said the writedowns relate to its business in Finland, where the economy is still contracting, as well as its operations in Northern Ireland and Estonia. The bank has struggled to scale back its presence in markets hit by Europe’s debt crisis as it cuts costs to compete with Swedish competitors.

Danske Bank operated a personal and business banking franchise in Ireland first under the National Irish Bank brand, and then its own, is currently downsizing its Irish operations by quitting retail banking with a view to focusing on servicing larger corporates.

Talks with the Financial Supervisory Authority in Copenhagen focused on Danske’s ability to cope with varying interest-rate climates, Ramlau-Hansen said. The writedowns revealed today “are mainly due to the rate level,” he said.

Danske now assumes interest rates won’t start to rise for years, he said. “The impairment is based on the fact that we’re seeing rate levels continuing to fall throughout 2014 and there’s a lot to suggest that rate levels will remain very, very low for a very long time,” Ramlau-Hansen said.

Denmark’s central bank uses monetary policy to defend the krone’s peg to the euro, forcing the bank to track decisions made by the European Central Bank. Governor Lars Rohde said this month his bank has yet to test the extremes of negative rates as it tries to keep up with the ECB. Denmark’s deposit rate is minus 0.05 percent.