Danske Bank to pay dividend for the first time since 2007 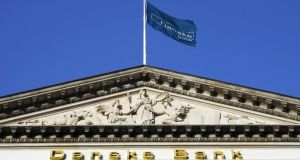 Danske Bank said it will pay its shareholders a dividend for the first time since 2007 as Denmark’s biggest lender struggles to match its largest Nordic competitors.

Owners will be paid 2 kroner a share, or 28 per cent of the lender’s net income for the year, Copenhagen-based Danske said today in a statement.

The year “was a time of progress for Danske Bank,” chief executive Thomas Borgen said in the statement. “We took steps to strengthen our position in the market, accelerated the execution of our strategy and contained costs. Our financial results improved, but they were still unsatisfactory.”

Danske, which has the lowest return on equity among Scandinavia’s biggest banks, has struggled to recover from burst property bubbles in Denmark and Ireland that depressed loan demand in its main markets and triggered ratings downgrades. The bank responded last year by firing Eivind Kolding as CEO after 19 months on the job.

Mr Borgen, who became CEO in September, cut the bank’s 2015 return-on-equity target a month later to 9 per cent from 12 per cent. He also pledged to expand cost cuts by 1 billion kroner as low interest rates depressed income. Danske Bank shares have gained about 8 per cent since chairman Ole Andersen fired Mr Kolding five months ago.

Mr Borgen, who has worked at Danske since 1997, said in October the bank may have alienated customers by closing branches too fast. He said then he would start a 360 degree service check of the bank to ensure it doesn’t misread client needs in future.

Net interest income slid 5 per cent from a year earlier to 5.68 billion kroner in the quarter. Loan impairments declined 40 per cent to 845 million kroner. (Bloomberg)