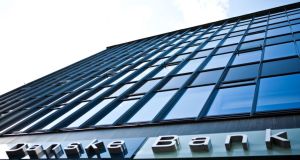 Danske Bank has fired Eivind Kolding as chief executive officer less than two years after he started, as the lender said it wants to put a more experienced banker at its helm. Kolding, 53, who became CEO of Denmark’s biggest bank in February last year, will be replaced by Thomas F. Borgen, who has worked at the bank since 1997 and is a member of its executive board, responsible for corporate and institutional banking, Copenhagen-based Danske said.

“The board of directors has assessed that, notwithstanding Eivind Kolding’s professional and personal qualities, it is in this phase necessary to have a CEO with stronger qualifications within banking,” Chairman Ole Andersen said in the statement.

Since being dragged through housing bubbles in Ireland and Denmark, Danske has met rising capital requirements and record- low interest rates with cost cuts. Under Kolding, who led A.P. Moeller-Maersk A/S’s container shipping unit before becoming CEO at Danske, the bank introduced a pricing model to reward customers with the most business there.

The plan, and an advertising campaign to promote it, was slammed by local media and Danske in June fired its head of communications, Eva Hald.

“Danske has a difficult task in the coming years in catching up with the Swedish banks, so it’s important that they have the right team,” Christian Hede, an analyst at Jyske Bank A/S, said.

Since Kolding took the helm at Danske 19 months ago, shares in the bank have returned 26 per cent, compared with 38 per cent for Nordea, Scandinavia’s biggest bank, and 56 per cent at SEB. The figures include reinvested dividends, which Danske last paid in 2007.

“It’s not my impression that Eivind Kolding has done a bad job,” Hede said. “He’s had a very specific task: developing and implementing a new way of going about business. I’m not going to change my estimates based on this.”

Andersen said Borgen will help the bank improve its customer focus as the lender seeks to improve its image at home. Borgen, 49, “is an experienced and customer-oriented banker, who knows how to run a modern bank,” Andersen said. He has “a strong focus on goal-oriented execution in close collaboration with the board of directors, the executive management and the employees.” Borgen, who was CEO of Danske’s Norwegian unit, Fokus Bank, from 2001 until 2009, was “quite successful” in that role, Hede said. “He doesn’t have anything to do with the bad loans in Ireland or Denmark, so to that extent, he’s clean.”