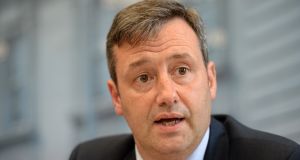 Minister of State Michael D’Arcy: expressed concern last month that claimants had a propensity to go to the courts due to a perception that higher awards can be won. Photograph: Dara Mac Dónaill

The number of personal injury claims before the courts last year jumped 15 per cent, which is likely to heighten concerns surrounding the insurance industry and rising premiums.

The Courts Service’s annual report for 2016, which was published on Tuesday, also shows that claims before the High Court, where the largest awards can be made, rose by 18 per cent. The biggest award made in the year totalled €9 million.

Personal injury claims are dealt with by the Injuries Board, but claimants are still permitted to access the courts at the end of that process in the event they are unsatisfied with the board’s award.

Michael D’Arcy, Minister of State with responsibility for the insurance sector, expressed concern upon his appointment last month that claimants have a propensity to go to the courts due to a perception that higher awards can be won.

Despite the rise in claims, the Courts Service’s annual report shows the total value of damages awarded by the legal system fell, due to a significant drop at the High Court, despite rises at the District Court and the Circuit Court levels.

The High Court, which has unlimited power to award damages, dealt with 8,510 cases, including 1,001 related to medical negligence. That represented an 18 per cent increase on the 7,219 in 2015.

There were 535 awards made by judges compared with 501 the year before. The total amount awarded by the District Court was just over €4 million, which was up from €3.5 million in 2015.

The figures from the Courts Service can be compared with the Injuries Board, where 9 per cent of awards last year related to sums of less than €10,000, while 79 per cent were under €30,000 in value.