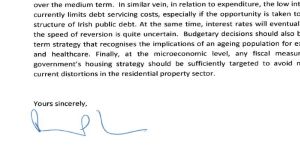 The first point of note in Central Bank governor Philip Lane’s pre-Budget letter to Minister for Finance Michael Noonan is the governor’s rather interesting signature. There is a study here for graphologists, armed with the knowledge that Central Bank governors never want to give too much away in anything they write or say.

The governor’s comments in the letter are a little easier to interpret, even if you still need to read between the lines. The key message is that Minister Noonan and his colleagues need to be particularly careful in putting the Budget together, given the almost unprecedented uncertainties which we face after the Brexit vote.

Now Central Bank governors are never likely to advise a finance minister to “spend, spend, spend”. But Lane makes a couple of telling points. Chief among them is the need to set a long-term strategy of debt reduction. A debt-level target of 60 per cent of GDP is set by the European Commission as a marker for all countries. But Ireland has a particularly volatile history of economic growth, Lane points out, and our GDP figures are now grossly inflated by multinational activity here. Ireland needs to agree and aim for a lower debt figure, he argues. And he has a point.

Then, like a boxer trying to win over Olympic judges with a final volley of blows, Lane hits Noonan with a host of other reasons to be cautious in the last paragraph.Corporate tax revenues cannot be relied on to continue at the current level, central bank profits are likely to fall, higher interest rates will, at some stage, push up the cost of debt servicing, and we need to allow for an ageing population. Then, just when Minister Noonan might expect a cheery sign-off, he is warned not to mess up the housing market.

All in all, the governor’s letter may not be too popular in Merrion Street. But winning popularity is not what being a governor is about – and Lane is carving out an independent line for the Central Bank. No doubt his senior officials will carry the same message when they appear today before the Budget Oversight Committee which has a role in the “new politics” in the run-up to the Budget.