Buyer beware: Stock markets could be heading for a crash 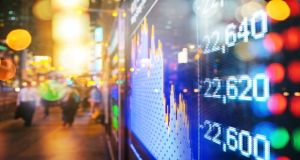 Whether the markets have much more to run, global investors are now surely playing in extra time. Photograph: Getty Images

But with global stock markets now at more than 8½-year highs – basking against a Goldilocks backdrop of decent global economic growth and low interest rates – investors will not be as forgiving of any communications boo-boos from the man Trump plans to appoint to an office five minutes’ walk from the White House.

Jerome Powell, a private equity executive-turned central banker, is poised to succeed Janet Yellen as chair of the Federal Reserve in February, at a time when the market bulls are out in force.

The MSCI All-Country World Index, capturing 47 markets globally, reached an all-time high this week, bringing its year-to-date gains to about 19 per cent. It has surged 190 per cent since March 2009.

Financial pages have long given up getting excited about the fresh record highs hit almost weekly by the Dow Jones Industrial Average, Nasdaq and S&P 500 indices, as Wall Street enjoys its longest sustained rally aside from the bull market of 1987-2000.

The Iseq, by the way, remains almost one-third off its all-time high in February 2007, due to the dominance of catastrophically overvalued banking stocks at the time.

Whispers of “irrational exuberance” – a phrase uttered by former Fed chair Alan Greenspan to warn of overvalued stocks during the dotcom bubble – are being drowned out by calls from venerated investment houses such as Credit Suisse, Deutsche Bank, Unicredit and Morgan Stanley predict a repeat of 2017 next year as global growth and corporate earnings expand apace.

The last thing they need is for Powell to say anything that will upset the party.

“Despite heightened tensions on the Korean peninsula, global equities rose strongly in 2017, supported by synchronised growth, lower-than-expected inflation and ample liquidity from central banks,” Credit Suisse said in a report during the week. “We believe that the risk of a global recession is low in 2018, so our equity outlook is generally constructive. It is a simple but powerful thesis: growth boosts earnings, subsides volatility, and mitigates default risk.

“Elevated equity valuations are not yet a significant concern. Traditional metrics such as the price/earnings ratio are high, but not yet at extremes that would point to excessive exuberance.”

But there are signs only the foolhardy would ignore.

A recent fund manager survey published by Bank of America Merrill Lynch found that a record 48 per cent of investors say that stocks are overvalued. Counter intuitively, the survey also found that fund managers’ cash positions in their portfolios fell to 4.4 per cent in November from 4.7 per cent last month.

While a Morgan Stanley report this month, titled Credit Check-up: How Will the Bull Market End, signalled that we’re at the latter part of the stock market cycle, it said equities usually do well at the tail end.

Looking for alarm bells, the Wall Street giant is focused on “three Xs” that tend to cause trouble at the end of a cycle: “eXtreme leverage build-up, eXubarent sentiment and eXcessive policy tightening” by central bankers.

On the first point Morgan Stanley has noted that corporates are loading up on debt, while there is also “some evidence of buoyant spirits in some markets” on the sentiment front, “but not at fever pitch yet”.

On the monetary policy side, the Fed has raised rates four times – or a total of 1 percentage point – since late 2015, with another likely early next month and more on the cards next year.

And while the minutes of the Fed’s latest rates-setting committee meeting at the turn of the month, released this week, show members were largely optimistic about the US economy, “several” flagged concerns about “a potential build-up of financial imbalances”.

Put more simply: “They worried that a sharp reversal in asset prices could have damaging effects on the economy.”

Whether the markets have much more to run, global investors are now surely playing in extra time.

Permanent TSB chief Jeremy Masding might ordinarily take umbrage at the Central Bank’s decision earlier this month that his bank is no longer viewed as “systemically important” to the financial system.

But it means that the bank will be able to avoid having to build up an additional layer of capital as a buffer against future economic shocks – and most likely escape EU-wide stress tests next year. These days, PTSB must take all the breaks it can get.

As the European Central Bank pushes euro zone banks to sort out their problem loans – with Italian banks being the primary target – PTSB is collateral damage. Part of the reason why the bank’s non-performing loans (NPL) are at 28 per cent of its total portfolio, the highest in Ireland, is because the EU had forced it to sell down its performing UK loans in recent years.

In addition, about half of its NPLs are actually restructured and yielding 3.6 per cent in cash annually. But because of the nature of the cures, such as split mortgages, where repayments on a portion of the mortgage are put on ice, they remain in the NPL bucket.

The ECB doesn’t do nuance and PTSB is now preparing to sell billions of euro of NPLs. Would-be buyers are eyeing deep discounts.

As US investment bank Keefe, Bruyette & Woods indicated during the week, PTSB will do well to avoid another cash call as it sees through the sales.

1 Boeing identifies new software flaw in grounded 737 Max
2 GoMo is being investigated by advertising authority
3 Barclays to cut 100 senior roles as lender seeks to rein in costs
4 Labour Court expected to rule on Paddy Power workers’ claim
5 ‘Life in Vilnius reminds me of Ireland in the 1990s’
6 Irish people like nothing more than being bribed with their own money
7 Volkswagen chief warns ‘sacred cows’ need slaughtering
8 Pointy sale: How a Google reject built a $160m company and sold it to Google
9 Budget 2020: New emissions tax on new cars and used imports
10 Ulster Farmers’ Union calls for vegan ads to be removed from buses
Real news has value SUBSCRIBE