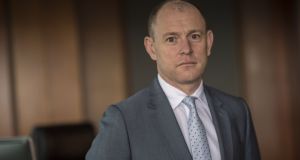 Irish Life Group, the largest life insurance and pensions provider in the State, made an €85 million profit from the sale earlier this year of its minority stake in the Irish unit of German insurer Allianz.

The figure is contained in the 2016 annual report for Irish Life, filed in recent days with the Companies Registration Office, and disclosed as an event that took place after the reporting period.

Allianz agreed in February to pay €145 million to buy out Irish Life’s 30.4 per cent stake in general insurer Allianz Irish Life Holdings. The Munich-based group took a controlling stake in the business in 1998 through its original purchase of 66 per cent in AGF Irish Life, then a holding company for Church & General and Insurance Corporation of Ireland.

Irish Life was acquired from the State by Canada’s Great-West Lifeco in 2013 for €1.3 billion.

The full-year report shows that Irish Life Group received a €144.9 million dividend at the end of March from its subsidiary Irish Life Associated Holdings, after the latter received cash relating to the deal from Allianz. Irish Life immediately transferred the money to its own immediate parent, UK-based Canada Life Limited, by way of a dividend.

Irish Life’s net profit rose to €138.9 million last year from €80.2 million in 2015, boosted by an increase in dividend income from subsidiaries, including Irish Life Assurance (ILA).

Irish Life, which has more than 1.3 million customers, also formed a health insurance arm last year, following its acquisition of Aviva Health and the move to take full control of GloHealth, in which the company previously held a 49 per cent interest.

Corporate tidying-up exercises carried out by Irish Life in 2016 included the group buying 100 per cent of Canada Life Ireland Limited (CLI), a fellow Great-West Lifeco company, for €139 million to facilitate the transfer of CLI’s 11.3 per cent stake in ILA.

“The purpose of this transaction was to increase efficiency and reduce complexity of any future ILA related transactions or requirements,” it said.

In addition, Canada Life Limited injected €200 million into Irish Life in December, which went on to transfer the money to ILA to finance the redemption of €200 million of subordinated debt that was due on February 8th.

Last week, Irish Life reported that that it made a €42 million contribution to its Canadian parent Great-West Lifeco in the third quarter of 2017, up 17 per cent on the year. The disclosure came as Great-West Lifeco unveiled its own latest quarterly results.