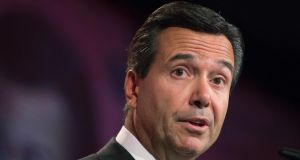 Lloyds Banking Group is paying its first dividend for six years after reporting a rise in profit and improvements in its capital strength, a milestone in the bank’s recovery after it was bailed out during the financial crisis.

The bank, which was rescued at a cost of £20 billion to British taxpayers, said it would pay a dividend of 0.75 pence for the 2014 financial year. Chief executive Antonio Horta-Osorio said Lloyds, which offered some of the highest dividends in Britain before the crisis of 2007-2009, said it intended to pay out at least half of its sustainable earnings in the medium term.

Mr Horta-Osorio has turned Lloyds around since becoming its chief executive in 2011, simplifying the business and slimming down to focus on lending to British households and businesses and meet tougher regulatory rules on capital.

But LabourMP John Mann, who sits on parliament’s Treasury Select Committee criticised the bank for handing Mr Horta-Osorio a pay package for 2014 worth £11.5 million.

“It’s obscenely high. The taxpayer hasn’t got his money back yet. He’s getting the benefits. Where’s the money back for the taxpayer? Why’s he getting so much and the taxpayer so little?,” Mr Mann said.

Mr Horta-Osorio also said he would accept shares worth about £7 million pounds awarded under a plan set out in 2012, but would not sell them until the government has sold more shares. “I am intending to keep these shares until the government stake is significantly further reduced, “ he said.

Lloyds reported an underlying profit of £7.8 billion , up from £6.2 billion the year before and ahead of the market expectations for a profit of £7.5 billion.

The bank said its core Tier 1 ratio, a key measure of its financial strength, rose by 250 basis points to 12.8 per cent. “Today’s results are another major milestone in the recovery of the British economy from the great recession and the bank bailouts,” said Britain’s finance minister George Osborne.

The government will receive a dividend of 130 million pounds which Osborne said would be used to reduce the national debt. It has already raised nearly 8 billion pounds from the sale of shares in the bank, reducing its stake to below 24 percent.

Industry sources say paying a dividend will help the government sell its remaining shares, making the shares more attractive and raising the prospect of a sale to private retail investors. Lloyds is further along the road to recovery than its bailed-out rival Royal Bank of Scotland, which on Thursday reported a hefty 2014 loss. RBS’s turnaround has been hampered by investigations into past misconduct and a sale of the government’s 79 per cent stake remains some way off.

Lloyds reported a net profit of £1.8 billion but set aside a further £700 million to compensate customers mis-sold loan insurance, taking its total bill for Britain’s most expensive consumer scandal to over £12 billion , the most of any bank. Shares in the bank rose 0.9 per cent to 79.23p.

1 How much state pension will I get next year?
2 Oxford Covid vaccine trials offer hope for elderly
3 Tesco takes to the skies with home delivery by drone
4 Apple planning updates to its AirPods earbuds next year
5 Covid-19 will worsen shortage of accountants, says CPA Ireland
6 Outgoing Irish a sitting duck for Covid
7 Ulster Bank to introduce new card payment controls on app
8 State has won more than 80 Brexit-related FDI projects
9 Aryzta to pursue asset sales as takeover talks fail
10 How to . . . move (almost) everything to your new phone
Real news has value SUBSCRIBE