BNP Paribas chief operating officer to go amid US probe 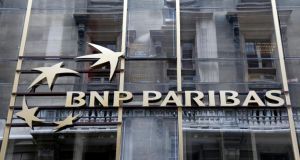 BNP Paribas’ 64-year old chief operating officer is to retire on Sept 30th and will step down from his duties on June 30th at his own request, the French bank announced on Thursday as it wrestles with US authorities over a potential $10 billion fine.

New York’s banking regulator has asked that the long serving COO, Georges Chodron de Courcel, should go as part of a settlement involving sanctions violations, a person familiar with the matter told Reuters on June 5.

BNP Paribas did not mention the investigation in its announcement. It said Mr Chodron de Courcel had “devoted his entire 42-year career to BNP and then BNP Paribas, and has made a decisive contribution to the Group’s development, and especially to the project which eventually led to the creation of the new BNP Paribas entity.”

His pre-retirement departure, in less than three weeks time, would allow him to comply with new French bank regulations on the number of directorships he can hold, the bank said.

A spokeswoman for the bank said he had planned to retire this year anyway and would not comment on the US proceedings.

US authorities are probing whether BNP evaded sanctions relating to Sudan, Iran and other countries between 2002 and 2009, and whether it stripped out identifying information from wire transfers so they could pass through the US financial system without raising red flags.

BNP Paribas may have to pay a fine of about $10 billion and face other penalties such as being suspended from clearing clients’ dollar transactions, sources close to the situation have said.

On Wednesday, Bank of France governor Christian Noyer said a dollar clearing suspension could be disruptive to the international financial system.

BNP has said publicly only that it is in discussions with U.S. authorities about “certain US dollar payments involving countries, persons and entities that could have been subject to economic sanctions”.

It has set aside $1.1 billion for the fine but told shareholders it could be far higher than that. Last month it also said it had improved control processes to ensure such mistakes did not occur again.