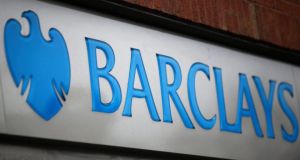 ‘This appears to be criminal action and we will co-operate with the authorities on pursuing the perpetrator,’ the bank said in a statement. Photograph: EPA

Barclays bank has started an investigation after a newspaper reported that the personal details of 27,000 customers had been stolen and sold.

Confidential information on customers’ earnings and health as well as passport details had ended up for sale, The Mail on Sunday reported, citing data provided to it by a whistleblower.

Barclays said it had notified regulators and started an investigation, the initial findings of which suggested the files were linked to the Barclays Financial Planning business which closed in 2011.

“This appears to be criminal action and we will co-operate with the authorities on pursuing the perpetrator,” the bank said in a statement this morning.

The data leak is the latest blow for the British bank after a series of mis-selling and interest rate-fixing scandals.

6 State factors in reduction of €2bn in corporation tax

10 Online banking: Are we getting less but paying more?