Banks under pressure to use split mortgages to tackle arrears 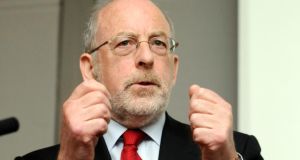 To split or not to split mortgages.That is the decision facing banks in Ireland and those in arrears with their home loans.

Central Bank of Ireland governor Patrick Honohan has made it crystal clear that he sees split mortgages as playing a central role in resolving the large level of arrears that have accumulated here since the economy crashed in 2008.

Between them, they owed €18.1 billion to their lenders, which is 16 per cent of the outstanding balance on all mortgage accounts here.

Solving this problem has become something of a political hot potato. The banks reckon they can resolve the issue given time and left to their own devices. They assure us they have no desire to put people out of homes.

The Government believes the banks have let this drag on too long and wants action now. It’s under pressure from voters to keep the banks in their box and to stop letting them dictate the game.

The Central Bank also wants our banks to get moving on mortgage arrears but, given their still fragile financial state, it has to be careful not to impose a solution that would derail their recovery. It’s a delicate balancing act.

The regulator sees split mortgages as a key part of the resolution targets it set in March. It has told the banks it wants “sustainable solutions” to be provided to half of those in arrears by the end of this year, with the terms of the restructured mortgages being met in 75 per cent of cases by the end of March 2014.

The banks would have preferred if the effect of the Dunne judgment, which has blocked repossessions in recent years, had been reversed first. They also argue that time should have been given for the new personal insolvency regime to take effect and for the results of a pilot scheme between secured and unsecured lenders to emerge before setting such targets. All of these boxes have yet to be ticked.

Warehoused balance
Split mortgages are one solution the banks will use to meet their targets. In simple terms, they involve splitting a mortgage into two parts for a borrower in arrears. The bank assesses what a borrower can afford to pay and warehouses the balance to be dealt with at a later date, typically when the term of the mortgage expires.

Each bank has its own view on how they should operate.

Bank of Ireland charges interest on the warehoused portion of the mortgage. So this debt continues to grow over the term of the loan.

AIB, EBS and Permanent TSB don’t charge interest. PTSB is only a recent convert to this view, having originally decided that a “nominal” rate of interest should be charged. These arrangements are now being unwound by the bank.

Ulster Bank and KBC, which both have parent groups outside the State, say they deal with split mortgages on a case-by-case basis.

There is no set formula for what percentage should be warehoused, and the final treatment of the warehoused piece of the loan is also a grey area and varies from bank to bank.

The Central Bank is keen to put some structure on the operation of split mortgages. Honohan feels it is important that the ground rules are laid out clearly at the time of the agreement. The banks are decidedly lukewarm about this – pre-ordained debt forgiveness just isn’t part of their DNA.

End of term
The regulator believes that a borrower should know at the outset what amount of the warehoused loan will be repaid at the end of the mortgage term.

This is how it might work. A borrower owes €400,000 but can only afford the repayments on half that amount. The other €200,000 is warehoused for the remainder of the loan term.

The borrower will continue to have a lifetime interest in the property. So they can’t be forced out of their home.

This allows them to either agree a trade-down arrangement with the bank or stay there until they die, at which point the house is sold with the bank having a charge on the €175,000 still owed.

In the event that the financial circumstances of a borrower improve, the Central Bank believes that the upside should be shared 50/50 by the bank and the borrower. A similar arrangement forms part of the personal insolvency regime.

These arrangements seem to give a little something to both sides. Crucially, they avoid the banks having to crystallise big losses on the loans in the near term, thereby avoiding any need to raise more capital.

We’ve had just 144 split mortgages to date, which tells its own story.

And the reality is that banks will probably continue to prioritise legal action against those in arrears of three years or more and deemed to be not co-operating, and will also pursue forbearance measures, such as interest-only, before offering split mortgages.

Honohan has set his stall out on split mortgages. This will be a test of his resolve to finally bring the banks to heel on the arrears issue.