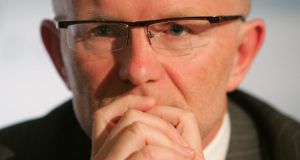 Former Anglo Irish Bank non-executive director Fintan Drury who is to give evidence to the banking inquiry.

The Oireachtas Banking Inquiry has decided to suspend the publication of the witness statement of former Anglo Irish Bank chief executive David Drumm pending “further discussions” with the Director of Public Prosecutions.

The decision followed an intervention on Wednesday by the DPP seeking the inquiry not to publish the report.

The committee then sought clarification on the DPP’s objections.

The inquiry met in private session twice this morning to consider its own legal advice on the matter and decided not to publish the statement at this point.

The committee intends to seek further clarifications from the DPP before reaching a final decision on publishing Mr Drumm’s statement, which was received some weeks ago.

The DPP has already blocked the inquiry from hearing video evidence from Mr Drumm from the United States.

The inquiry’s private meetings this morning meant the appearance of former Anglo non-executive director Fintan Drury was delayed by 90 minutes.

Mr Drumm’s statement is believed to have contradicted evidence from Brian Cowen about the nature of discussions during events attended by the former Taoiseach with the Anglo executives in 2008.

These engagements were organised by Mr Drury.

The inquiry is also due to hear today from Alan Dukes, a former chairman of Irish Bank Resolution Corporation, and Mike Aynsley, the former CEO of IBRC.

It is understood Mr Drury will tell the committee that the board of Anglo told the financial regulator about Seán Quinn’s large shareholding in the institution, built up to 2008, as soon as it became aware of it.

Mr Drury will insist he and other directors informed the financial regulator once the position became clear.

It emerged in 2008 Mr Quinn had built a large stake in Anglo through the purchase of shares via contracts for difference.

Mr Drury is to tell the committee Anglo failed to meet basic practices and standards and that was a source of regret.