Claim by Basil Geoghegan that the government sleep walked into guarantee 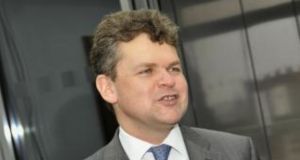 Basil Geoghegan: State aid might have gone in the door of the Irish banks but it immediately went out

The Government’s decision to introduce a blanket bank guarantee in September 2008 was “unwise” and “unwarranted”, a key adviser on banking strategy at the time of the financial crash told a seminar in Dublin today.

“I spent quite a lot of time over here in 2008 onwards and was present at a number of the meetings where we ended up taking what I think was an incredibly unwise and unwarranted decision, which was to give a complete 100 per cent bailout of all of the banks in the Irish economy,” said Basil Geoghegan, managing director head of Ireland investing banking at American financial giant Citi.

“Again, it was a learning experience for all involved and I think the people who had to take that decision had simply not had the preparation to do so.”

At the time of the bank guarantee in 2008, Mr Geoghegan was working for Goldman Sachs and advising Irish Nationwide on strategic options. Irish Nationwide was subsequently nationalised and bailed out by the State to the tune of €5.4 billion.

It was later closed by the State and merged with Anglo Irish Bank under the umbrella of Irish Bank Resolution Corporation, which itself was placed into liquidation in February 2013.

Mr Geoghegan, an Irishman who splits his time between Citi’s operations in Dublin and the UK, was also a leading strategic adviser to the British government at the time of the run on deposits with Northern Rock and the closure of building society Bradford & Bingley.

“As a result of the ill fated decision taken in September 2008, the [IRISH]Government has ended up putting north of €60 billion into the Irish banks. Over half of that was put into banks that could never have survived and are now owned through IBRC,” Mr Geoghegan told a breakfast seminar on the Irish economic recovery hosted by pensions group Invesco.

Mr Geoghegan said an unfair element to the bank guarantee was the decision by the European Union to categorise it as state aid.

“Having sleep walked into this guarantee we then ended up having it declared as State aid by the EU. Now I would argue that the State aid might have gone in the door of the [IRISH]banks but it immediately went out and provided aid to other people around the EU.”

On the prospects for the taxpayer recovering its investments in Bank of Ireland, AIB and Permanent TSB, Mr Geoghegan said the State was like to “get its money back and some form of excess return” on Bank of Ireland.

The return to the State on AIB was likely to be “plus or minus 10 per cent” of the €20.8 billion bailout, when guarantee fees and other payments to the exchequer are added into the equation.

On PTSB, he said the bank would possibly need to raise a “significant amount of capital” over the next three to five years to comply with regulatory rules on capital buffers.

He raised concerns about Bank of Ireland and AIB’s dominant market shares in Ireland, which range from 50 per cent to 70 per cent “depending on what products you pick”.

“It is never healthy in any market where you have such a strong oligopoly. The issue I would see for us from a policy perspective is that we need to have more healthy banks in our economy. That is something we have as a failing and it’s not quite clear to me how we are going to address it.”