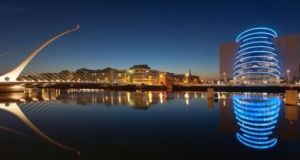 London-headquartered alternative investment specialist Trium Capital has become the latest asset manager to establish a base in Dublin as it looks to “Brexit-proof” its business.

Trium, which has a full-scope UCITS platform for investment managers to set up Irish-domiciled funds, has applied for authorisation to establish a management company in the Republic in order to retain its current access to the European market in case of a hard Brexit.

A number of international funds players have either scaled up their Dublin-based management companies or established new ones in recent years as they seek to avoid the fall-out from a disorderly Brexit. These include Aberdeen Standard, Baring Asset Management, Legal & General, Legg Mason and Morgan Stanley.

Speaking to The Irish Times, Andrew Collins, who will lead Trium Capital in Dublin, said the asset manager has operated a range of Irish funds from the UK since 2015 and has always intended to establish a presence locally.

“We’d always intended to put feet on the ground in Ireland because EU regulators are moving towards wanted to see people based in relevant jurisdictions. Being here gives us an opportunity to enhance our sales offering and gives us the cover we need for Brexit as well, “ he said.

Mr Collins said while a memorandum of understanding was in place between European regulators and the UK’s Financial Conduct Authority (FCA) that allows Trium to continue to manage its funds from London, the Irish entity will have the necessary permissions to allow distribution to continue largely as it is today in the event of any disruption from Brexit.

Trium said it expects to create a handful of jobs initially but hopes to build the business in Dublin over time.

“We are not going to be an Aberdeen but we’re definitely looking to have a decent presence on the ground,” said Mr Collins.

Asset managers account for about half of the 100-plus applications the Central Bank is dealing with from firms seeking authorisation in the State as a result of Brexit.

More than €2.5 trillion of global fund assets are domiciled in Ireland in an industry that employs about 14,000 people.