Aon to buy Willis for nearly $30bn in insurance mega-deal 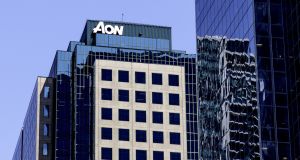 UK-based insurance broker Aon said on Monday it would buy Willis Towers Watson for nearly $30 billion (€26.2 billion) in an all-stock deal that creates the world’s largest insurance broker in an industry struggling with falling margins.

The deal unifies the sector’s current second and third largest players, overtaking current leader Marsh & McLennan, as they face challenges ranging from the coronavirus outbreak to the fallout of climate change.

First mooted a year ago, it also comes after a period of brutal competition which has seen insurance premiums fall while claims continue to grow.

Aon confirmed last year that it was in early stage talks with Willis Towers before quickly scrapping the plans, without giving a reason.

Marsh in the meantime sealed its purchase of British rival Jardine Lloyd Thompson for $5.7 billion last April, cementing its position as the biggest global player.

Willis shareholders will receive 1.08 Aon shares, or about $232 per share as of Aon’s Friday close, representing a total equity value of $29.86 billion. The offer is at a premium of 16 per cent to Willis’s closing price on Friday.

The deal is expected to add to Aon’s adjusted earnings per share in the first full year of the deal, with savings of $267 million, reaching $600 million in the second year, with the full $800 million achieved in the third year.

Aon will maintain its headquarters in London and the combined company will be led by Aon chief executive Greg Case and Aon chief financial officer Christa Davies.

When asked about the timing, Mr Case told analysts on a call: “It is not about today or next week, it’s about the long term.” “We know each other well and this came together pretty quickly.”

Aon’s financial advisor for the deal is Credit Suisse Securities, while Willis was advised by Goldman Sachs. – Reuters