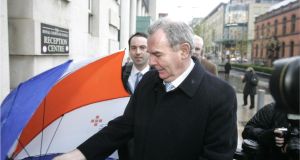 An Anglo Irish Bank report on the huge stake built up in it by Seán Quinn claims the financial regulator was told by Anglo in September 2007 about that stake, was regularly updated on the bank’s efforts during 2008 to dilute it and had put pressure on the bank to do so.

The January 2009 report, referred to as the “O’Connor Report” and written by former Anglo executive Pat Whelan, also describes as “an error of judgment” a decision by some within the bank to alter recourse provisions on loans made to 10 of the bank’s best customers (the Maple Ten) as part of Anglo’s efforts to dilute Mr Quinn’s contract for difference positions in Anglo.

The report is among various documents relied on by the Quinn family to support their claims the regulatory authorities were aware Anglo was advancing unlawful loans to Quinn companies from late 2007 to prop up its share price.

The family claim those facilities were loaned to meet margin calls on Mr Quinn’s contract for difference positions in the bank, which at their height gave him a 28 per cent stake.

The report also said the bank in January 2009 held all the shares in the Quinn Group as security for loans which then stood at €2.75 billion. Exercising that security was “a nuclear option” not to be considered lightly as that would collapse the Quinn Group, it said.

It concludes Mr Quinn put the bank into a “very difficult and vulnerable position” by building such a large position in it without the knowledge of the board or regulator.

Once the share price started to fall, questions were raised about Anglo’s soundness, all adding to pressure on it to solve the problem and the issues were compounded by the credit crunch and the numerous bank failures during summer 2008, it said.

Some difficult decisions were made during this time to keep the bank alive and, with the benefit of hindsight, some of this might “appear unwise”, it said.

These included Anglo’s continued support of Seán Quinn in relation to his “working capital” needs, the introduction of ten of the bank’s most loyal clients [the Maple 10] and the decision to protect them against any recourse for loans made to them for the purpose of helping the bank dilute the Quinn stake.

Dealing with the Maple 10 transaction, involving the placing of 9.4 per cent of Mr Quinn’s CFD shares with 10 Anglo clients, it said the original recourse element stated recourse to the borrower “will be limited to 25 per cent of the balance outstanding”.