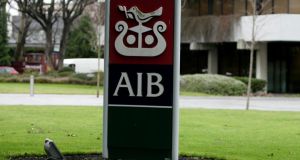 AIB has announced plans to pay a €250 million dividend to ordinary shareholders, its first since the global financial crash in late 2008.

The State will receive nearly all of the dividend payment as it owns 99.9 per cent of the bank’s shares following a €20.8 billion bailout by taxpayers.

AIB said the dividend payment was supported by “strong profitability and capital ratios”.

It is the first of the Irish banks bailed out by the State to pay a dividend. Bank of Ireland, which is 14 per cent State owned, said last week that it would resume a dividend payment next year while Permanent TSB, which is 75 per cent controlled by the Government, has yet to put a date on when it will make such a payment.

AIB chief executive Bernard Byrne also declared that the bank was “now ready” for a stock market flotation of its shares whenever markets permit and the Minister for Finance Michael Noonan decides to press the button.

The Government has indicated that it will float 25 per cent of AIB on the Dublin and London markets at some point this year, possibly as early as May.

Details of the dividend payment were included in AIB’s full year results, which showed a pre-tax profit of €1.7 billion for 2016. This was down about 10 per cent on the previous year.

AIB said its profit last year was driven by a strong sustainable business performance, net credit provision writebacks of €294 million, and one-off benefits including the sale of its holding in Visa Europe.

AIB’s net interest margin, a key measure of profitability, rose by 28 basis points to 2.25 per cent, while its cost-income ratio came in at 52 per cent. The bank said its €870 million strategic investment programme, which began in 2015, continues to deliver efficiencies, improved customer satisfaction and capacity for growth.

The bank closed the year with a fully-loaded Core Equity Tier 1 ratio of 15.3 per cent, well in excess of regulatory requirements.

Bank levies and regulatory fees increased to €112 million from €71 million in the year. This included contributions to the new Deposit Guarantee Scheme and the Single Resolution Fund.

Commenting on the results, AIB chief executive Bernard Byrne said: “This has been another milestone year for AIB Group. Our strong financial performance and robust capital base support our proposed dividend of €250 million to ordinary shareholders.

“This reflects our sustainable profitability, strong capital generation and focus on delivering for shareholders and customers. We returned a further €1.8 billion to the State during the year, which together with the proposed dividend, brings to €6.8 billion the amount AIB will have paid in capital, dividends, fees, coupons and levies.

“The bank is now ready for an IPO, when market conditions permit and the Minister decides. With a market leading franchise, strong customer focus and investment in digital, AIB group is well placed to continue to support our customers and the growing Irish economy.”

Mr Noonan welcomed the announcement of the dividend payment and said this year would be an “appropriate” time to consider a flotation of AIB shares.

“Today’s results from AIB confirm a very strong performance by the bank with sustainable profits, strong capital generation and very significant lending into the Irish economy,” he said. “The proposal of a dividend payment of €250 million to ordinary shareholders is particularly significant given that it is now nine years since the bank last paid a dividend to its shareholders. These results confirm the view that 2017 represents an appropriate time to consider an Initial Public Offering of AIB (shares).”