Start-up to extend €75m for social and affordable housing 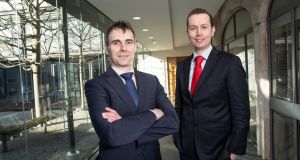 Property financier Initiative Ireland is to significantly ramp up lending for social and affordable housing in Ireland this year, with up to €75 million in funding to be extended to developers.

Initiative Ireland manages a community of investors, made up of funds and businesses, who co-fund construction projects to build social and affordable houses. They provide experienced developers with short-term, senior, secured property loans.

The investors charge an interest rate of 6-8 per cent on the loans, while Initiative Ireland charges a fee of 1.5 per cent at the start of the project, and a further 1.5 per cent at its conclusion.

Since its inception in 2015, the company has facilitated about €25 million in loans, but chief executive Padraig Rushe said on Tuesday that he expects €50-75 million to be made available during 2020.

The company said the expanded operations will fund the construction of “additional energy efficient, social and affordable houses” across the Republic, as well as “expanding into the Northern Ireland lending market”.

Initiative Ireland, which is a private company headquartered at NovaUCD and supported by Enterprise Ireland as a high-potential start-up, also plans to expand its investor community into the UK.

“At Initiative Ireland we support smaller development projects, providing a good return for our clients while also helping to deliver much needed social and affordable housing,” said Mr Rushe.

“To date we have seen the positive impact our model and in 2020 we will be looking to expand our offering into the UK market, in addition to scaling up our impact across Ireland, including Northern Ireland.”

The company further announced the appointment of Bryan Scannell as its new director of property lending, and said it will be making a number of additional senior appointments during the year.

Mr Scannell has more than 12 years of lending experience within the Irish, US and UK markets.

Having previously held roles with Ulster Bank and AIB, he joins Initiative Ireland from WebBank, a US chartered industrial bank which specialises in niche financing solutions and syndicated loans.

“He brings a wealth of specialist lending knowledge to the role,” said Mr Rushe. “He also understands and shares our values as an impact finance provider.

“It is essential for us as a company that our team is committed to delivering ethical and financially inclusive solutions that deliver a clear measurable social impact.”

Mr Scannell said he was excited to be joining a company that “stands out” as socially committed and value-driven.

“As such I am delighted to join the Initiative Ireland team as it plans to scale operations across Ireland and into the UK.”