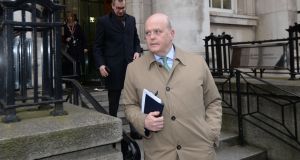 Colin Hunt: AIB’s chief executive said last month he planned to apply to regulators in the European Central Bank to start releasing some of the excess capital on its balance sheet. Photograph: Alan Betson/The Irish Times

AIB, which lost almost a quarter of its market value in a single day last week, is likely to hold off on paying a special dividend to the State and other shareholders this year as it focuses on assuring investors it will be able to ride out the economic storm caused by Covid-19, according to analysts in US investment bank Keefe, Bruyette & Woods (KBW).

But the KBW analysts, including Daragh Quinn, currently expect that the bank will follow through on its plan to pay out €217 million of normal dividends – equating to eight cent per share – on its 2019 earnings at the end of April. The Government continues to hold a 71 per cent stake in the bank after its bailout during the financial crisis.

AIB chief executive Colin Hunt said last month he planned to apply to regulators in the European Central Bank to start releasing some of the excess capital on its balance sheet from this year. The expectation has been that special dividends would be the most likely route, rather than share buybacks.

It is estimated that the bank had about €1 billion of surplus capital at the end of 2019, which could be returned to shareholders in the coming years, after the bank made significant headway in lowering its level of non-performing loans (NPLs).

However, AIB shares have slumped by 75 per cent in price this year – accelerated by a 24 per cent plunge on Thursday – and that will likely convince management to stall plans to start distributing surplus money, according to the KBW analysts.

“At this distressed value, we believe the focus should be on whether AIB can maintain the share count and not need to raise capital,” the KBW analysts said in a note to clients.

“We believe any potential additional dividends or a buyback will now be on hold. However, this could give an additional buffer to capital ratios.”

Analysts from Davy to KBW have struggled to make sense of AIB’s share plunge on Thursday, highlighting how the bank has more robust capital reserve levels, and a lower risk profile, compared to the wider European banking sector. Rival Bank of Ireland lost only 4.4 per cent the same day.

Market sources said that AIB’s slide was driven by a forced seller of the stock in the market and a dearth of buyers in thin trading volumes.

While shares in European banks are changing hands, on average, at a distressed level of 0.4 times the net value of assets on their books, AIB is trading at half that ratio, according to KBW.

1 Nine more suing INM and Leslie Buckley over alleged data hacking
2 Columbia Sportswear defies gloom with first Irish standalone shop
3 Could your old car be giving away all your secrets to its new owner?
4 Brexit: System agreed for Irish goods to skip checks on UK trade
5 ‘The rental situation stops me moving back home’
6 Home or car: what’s the best use of my savings?
7 Restaurants file court actions against insurers over lockdown losses
8 David McCullagh announced as co-host of RTÉ Six One News
9 Former Worldspreads chief Conor Foley faces €730,000 fine
10 Innovation hubs keen to get show back on the road
Real news has value SUBSCRIBE