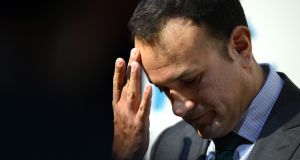 European Council president Donald Tusk was aghast when he learned in 2015 of then-UK prime minister David Cameron’s pledge to give voters what he called a “dangerous” and “stupid” referendum on EU membership in a frantic phone call to Downing Street.

Tusk, in a documentary to be aired on Monday, claimed Cameron told him that he would never have to hold the referendum because he expected to fall short of an overall majority in the general election, and that his coalition partners would block it.

Cameron’s spokesman disputed the claim, but – if true – the miscalculation was the genesis of his political downfall and the mess we find ourselves in today.

This week was dominated by the fallout from the crushing defeat of UK prime minister Theresa May’s Brexit deal. Most significantly, alarm bells sounded in Dublin as the EU said out loud for the first time that there would have to be border checks if a deal cannot be done.

First, the European Commission’s chief spokesman Margaritis Schinas said it was “obvious” there would be a hard border in those circumstances. Then EU chief negotiator Michel Barnier said the EU “will have the obligation” to check goods.

The Government quickly rejected suggestions there would be “border infrastructure” on the island of Ireland, but both Taoiseach Leo Varadkar and Minister for Foreign Affairs Simon Coveney admitted this would be difficult to achieve without a deal.

Varadkar, speaking at the World Economic Forum (WEF) in Davos, said it would trigger a “major dilemma” that would likely lead to an initial “period of chaos” before a deal similar to the one currently on the table would have to be agreed.

Crucially, Varadkar – echoing Barnier – also acknowledged that the Republic “has obligations to protect the single market”. That means checks of some sort somewhere if there is no deal.

Of course, the consequences of a disorderly Brexit will reach beyond the borderlands. A Central Bank report this week warned of potential food shortages and higher prices, as well as an “immediate impact” on the economy and “disruption” to trade flows.

Separately, Revenue Commissioners chairman Niall Cody dismissed claims by Brexiteers that there would be no dramatic change in Irish cross-border trade if the UK crashes out. There would in fact be “significant change”, he said.

In London, both Goldman Sachs and Airbus said they would be cutting investment in the UK if there was no deal, while inventor and prominent Brexit supporter James Dyson said he is to move his business headquarters to Singapore – but, ahem, not because of Brexit.

In Dublin, Minister of State for Financial Services Michael D’Arcy said firms fleeing Brexit could not expect the Central Bank to do them any favours to fast-track approval. Companies currently face delays of more than 12-18 months.

Davos grilling for Varadkar and Donohoe

Varadkar and Minister for Finance Paschal Donohoe got something of a dressing down at the WEF in Davos this week as politicians and international officials alike took aim at the State’s tax practices.

José Angel Gurria, secretary general of the OECD, said on a tax panel with Donohoe that Apple’s high-profile “sweetheart deal” here was an example of where the system was “being gamed”.

Meanwhile, Polish prime minister Mateusz – sitting next to Varadkar on another panel –criticised “tax havens in Europe which abuse their power, or abuse their taxation systems to the detriment of other countries”.

Varadkar said the Government was “forever closing loopholes” in the State’s tax system. “I’ve a very simple view on this. I think companies should pay the taxes they owe, in full and where they are owed.”

Separately, chief executive of IDA Ireland Martin Shanahan said the Republic would have to work harder to retain a healthy flow of foreign direct investment (FDI) due to political and trade concerns abroad.

His remarks came hot on the heels of a UN report which suggested large-scale repatriations of profits by US multinationals from the Republic meant total FDI fell by $121 billion (€106bn) last year.

That being said, social media giant Facebook this week announced a major investment here with a plan to create 1,000 new jobs in 2019. The jobs will be spread across its 60 teams, but the biggest injection is to be in its content policy and moderation section.

Elsewhere, Aldi is seeking to recruit more than 500 new employees this year, all of whom will be paid at least €11.90 per hour, matching living-wage recommendations. The grocery retailer is investing €160 million to expand and upgrade its Irish stores.

More housing in the works

Plans for more than 1,000 new housing units were unveiled this week as the race for supply to keep up with demand continued.

Irish housebuilder Cairn Homes agreed a joint venture with Nama with the aim of creating over 550 homes. Cairn said it had created a vehicle to build the homes on a 14.5-acre development site beside its Parkside development, off the Malahide road in Dublin.

Elsewhere, Ireland’s largest private landlord Ires Reit is readying a new planning application for 428 apartments at the Rockbrook development, following a previous rejection from An Bord Pleanála at the Sandyford site.

Staying in Dublin, Greg Turley, one of the brothers who founded car rental company Cartrawler, is seeking planning permission for a 55-unit, six-storey build-to-rent scheme in Terenure.

Finally, Irish company Arizun said it has secured €100 million in funding to buy up distressed mortgage loans with a view to keeping people in their homes on a sale-and-lease-back basis.

Arizun said its new Stay in Your Home scheme provided a way out of mortgage arrears for middle-income earners who do not qualify for Government support.