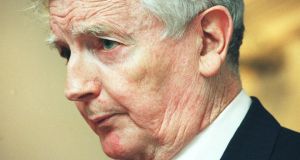 The family of the late judge Declan Costello has said that while he had a deposit account at Guinness & Mahon bank for a brief period in the 1970s, he never held an offshore bank account.

The family said the former president of the High Court had not recalled the existence of this account when invited to act as an inspector in relation to the affairs of Ansbacher Cayman Limited in September 2002.

In a dossier given to the Dáil Public Accounts Committee last week, a serving civil servant in the Department of Enterprise and Jobs, Gerry Ryan said he had discovered in 2003 records of a deposit account in Guinness and Mahon in the name of Declan Costello.

Mr Ryan, in 1998, had been appointed an an authorised officer under company law to investigate a scheme of tax evasion operated at Guinness & Mahon in Ireland and Ansbacher (Cayman) Limited.

Mr Ryan said he had written to Mr Costello who denied he had ever been a customer of Guinness & Mahon.

Mr Ryan suggested in the dossier that Mr Costello had had “a major undisclosed conflict of interest” while he led the High Court investigation into the company.

In a statement, the family of Mr Costello said he had opened the deposit account at Guinness & Mahon bank for a brief period in the 1970s at a time when the associated banks were closed due to a strike.

“It was opened to receive approximately €15,000, being his share of the proceeds of the sale of the family home of his late father.”

The family said Mr Costello had not recollected the existence of this account when invited to act as an inspector.

It said he resigned from the post as inspector in November 2000 due to ill health.

“He (Mr Costello) was contacted by the authorised officer investigating the affairs of Guinness & Mahon in 2004 in relation to the account, at which point he likewise had no recollection of this account. The account in question was a resident account and tax was duly and punctually paid on interest earned on the account.”

“At no time did he ever hold a non-resident or offshore account,” the family statement said.

Mr Costello, who died in 2011 aged 84, was a leading figure in the creation of the modern Fine Gael party, and a former TD, attorney general and president of the High Court.

His major contribution to politics was the Just Society document of 1964 which inspired a number of talented individuals, including Garret FitzGerald, to join Fine Gael.

Born in Dublin in 1926, he came from a political background. His father, John A Costello, was attorney general in the government of WT Cosgrave, and served twice as taoiseach, in 1948-51 and 1954-57.

In February 1992, he granted an injunction to then attorney general Harry Whelehan preventing a 14-year-old girl travelling to the UK for an abortion. The Supreme Court later lifted the injunction.